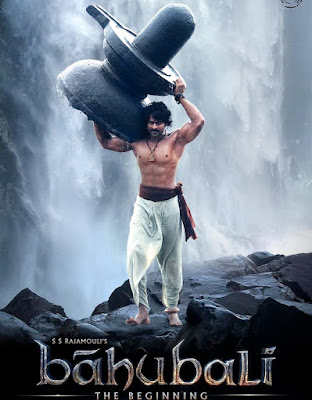 
First part of a fictionalized tale set in ancient times in fictional Mahismati, depicting a family dispute for the throne running across two generations. The competition between the two cousins for the throne is depicted mostly in flashback. The rightful ruler is slain and his wife kept captive while the cousin takes the crown. Their son, who is the image of his father, is raised away from the family. Growing up, he is unaware of his true parentage but unknowingly takes up the cause to free his mother.

A cliffhanger ending sets up the tale for revenge (to be taken up in the sequel).


MovieNotes
What Works
The highlight of the film is its grand scale. The waterfall scene is visually stunning as are the blue butterflies. The background music adds its own touch in bringing the stunning imagery to life. The biggest highlight has to be the climax battle scene. The visual effects of the fight scenes are probably as good as any that the big Hollywood studios have offered. Then there is the Tolkienish touch given by the script-writers who invented a whole new language for the Kalakeya tribes.

The lead protagonists Bhallaldeva and Bahubali (senior and junior) are all about rippling muscles with one of them literally taking a mighty bull by its horns and breaking it down.

The leads are ably backed up by strong support characters like Katappa and Shivagami. I really liked the depiction of Shivagami’s character as a strong authoritative administrator and fair decision maker, who treats her son and nephew as equal unlike the usual clichéd depictions offered in most movies.

The second half moves at a fast pace. And just when the tempo reaches its crescendo, comes the cliff-hanger ending. Enough questions are left unanswered ensuring that audiences will flock once again to the theaters to watch the epic (hopefully) conclusion.

What Doesn’t
The treatment of Avantika by Shivudu was wrong and its depiction was in bad taste. What exactly was the director thinking?

A query - How were the rulers able see the details from across the battlefield. They were reacting to every single event as if they were watching on tv screens and not from the edge of the battle-field

A couple of songs could easily have been edited out without affecting the story at all.

Rating – 8/10 for visualization and depiction although the story does slacken a bit in the first half.

Previously on MovieNotes: Minions
Posted by Nishant at 3:45 PM