The Zoozoos are Here 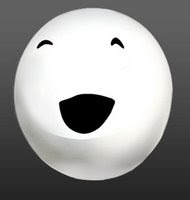 The Zoozoos are here, there and everywhere. The white creepy and cute figures with egg shaped heads, huge tummy and ultra-thin arms and legs are everywhere. They are on television and the internet. They are promoting Vodafone products during the ad breaks in IPL and now they have started giving interviews in innings breaks as well. Today, they arrived on the office computer screen. Apart from the ads themselves, I have seen them as facebook application, zoozoo smileys, zoozoo quizzes and what not. (By the Way, I am a cool Zoozoo, as are apparently all my friends). They can be downloaded as wallpapers, ads and even the making of ads themselves are available everywhere on the net, they can also be used as emoticons. And it seems there is no stopping them as Vodafone are planning to release 30 such ads. I guess, soon they will start appearing in dreams also jumping around and talking gibberish in their funny tones. Maybe by this time they will have a team of their own in all the major sporting leagues. Just imagine a team of zoozoos playing cricket or football :P.
But it has to be said it has been a brilliant and highly successful ad campaign.
Posted by Nishant at 11:41 PM 1 comment: