As the title suggests, this post is about my home state, Bihar. I am a proud Bihari and never have had to hide my state of origin to anyone. Although what there is to be proud of is a question to which I do not have any ready answer.
As I write this, over 2 million people have been rendered homeless due to the sudden floods in the Kosi river. The current occurence has been due to the sudden shift in the river's course due to the breaching of the embankment upstream in Nepal. The flood waters spread across the vast plains have caused large scale devastation with the worst probably still to come.
A natural disaster of this scale may or may not have been avoided. But the thing which really annoyed me is the almost complete lack of awareness of the situation amongst people outside Bihar. Here I am in Mumbai and I have heard no mention of the devastation amongst the people or even in newspapers. Only through the internet did I become aware of the magnitude of the situation.
This situation raises a pertinent question. Does India really care about Bihar? or has Bihar totally slipped out of the national conciousness? Bihar has become a by-word for lawlessness, and Biharis are the first ones to be targetted by the xenophobic politicians of every part of the country to raise their vote banks, be it in Maharastra or Assam. The question is why this state of affairs regarding Bihar. Maybe it is because of the politicians, always the first and easiest target.
Or is it because of the Biharis themselves, who have got so used to situation that they have stopped caring. We Biharis work hard. There are no doubts about it. But the hard work is for getting out of the state. Nobody wants to go back.
The state's infrastructure is in a mess. The education levels are amongst the lowest in the country. There is no industrial investment of any note in the state. Outsiders would not even think of going to Bihar. Whats the cause of all this? Does anybody have an answer?
Posted by Nishant at 7:59 PM 2 comments:

The Joker and Game Theory

First of all, I must make this clear. I really liked the movie "The Dark Knight", specially Heath Ledger's potryal of the Joker. While surfing found an interting link connecting one of Joker's actions with the Game Theory. In one of the sequences, the Joker plants bombs on two ferries stranded in the middle of the river with their detonators on the other boat. There is no way to go out from the ferry and the people have half an hour time to take their decision, otherwise he would blow up both the ferries. A case similar to the Prisoner's Dilemma. The attached link connects this sequence to the Game Theory and Nash Equilibrium.
http://www.quantitativepeace.com/blog/2008/07/the-dark-knight.html
Posted by Nishant at 7:30 PM No comments:

Its been a some time since college got over. Since then I have moved on. Joined my new work place. Have shifted to a new location. A new life met me. Some acquaintances got renewed. Some who were on the fringes of my college life became the new friends. Lost touch with quite a few people. Some have stayed in touch. And finally and I think most importantly met lots of new people. So in a sense, for me, the world has moved on quite a bit in the last few months.
After this boring background, I come to the point I am trying to make. I was chatting up with a friend today over the phone. During our conversation an intersting point came up. The point which I refer to as "The Empty Horizon". The fact is for probably the first time in my life i have nothing to look forward to in the coming future with certainity. So far life had been going on in quite an orderly manner. It was just a series of deadlines. Going to the first school. Year by year progressing through school. Then came the first major marker, the 10th board exams. Soon followed in a couple of years by the 12th board and the various entrance examinations. Then in engineering college came the semester system. One semester after the other went by and four years down the line I had become an engineer with a job in an oil company. I joined my first job in a totally new place but still I had something in mind. A certain target was still there in the horizon. I wanted to do an MBA, mostly to get out of the work conditions which I did not like. So over the next year, cleared CAT, cleared the interview and went on to join an IIM. 2 years of MBA came and went by. And now I am working for another oil company albeit in a totally different role.
After all this, I have nothing to look forward to in the future. There are no set deadlines. Except for some minor office work, which probably has no impact in the larger scheme of things. I guess now the time has come to take things as they come. Or the other way is to do things as I wish to do. And for whatever anyone might say, the only person who really matters for me is myself. Earlier I was living with targets which came and went by. Now have to find my own targets.
So in this sense definetely it is an empty horizon. And I guess this is what life really is.
And the only philosophy which stands true would be the good old Carpe Diem.
Posted by Nishant at 10:34 PM 1 comment: 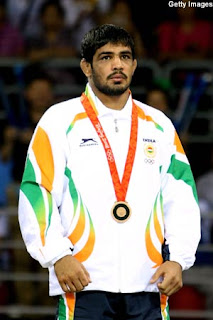 August 20, 2008
A day which will forever be etched in the memories of all Indian sports fans. India has achieved its best performance ever. The Helsinki record of 1952 was equalled with unheralded Sushil Kumar winning the bronze medal in 66 KG Frestyle category. This came as a pleasant surprise on a day when all Indian eyes were fixed on the boxers Jitender and Vijender. Though Jitender lost, the icing was provided with Vijender reaching the semi-finals assuring India of a third medal in the Beijing Games. 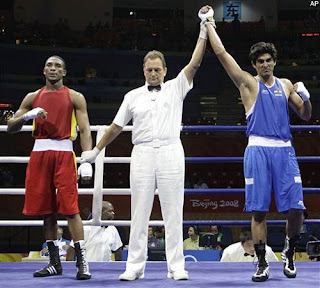 With these performances India has achieved its best ever Olympic performance ever. Apart from the medallists their have been heartening performances by individuals like Saina Nehwal, Mangal Singh Champaiya, Akhil and Jitender Kumar and Gagan Narang.
Lets hope these performances lead to even better performances in the future and more importantly bing more focus on the development of these sports.
To end the post this memorable quote from Akhil after beating the world champion "Dreams are not the ones you see while you are sleeping, but the ones that don't let you sleep"
P.S. To top the great sporting day our cricket team also won the ODI in Sri Lanka.
Posted by Nishant at 7:50 PM No comments:

This is in continuation with a post I had written on the same lines exactly a year ago.
http://nishantzworld.blogspot.com/2007/08/india-turns-60.html
A whole year has passed and I think its a good time to review what has or has not happened in the last 12 months. Quite a few things have happened in the past 12 months.
On the sporting front we now have our first individual Olympic gold medallist. We are the T20 world champions. Indian football team has reached the Asia Cup Finals for the the first time in over 20 years. And our national sport seems to be living only on past glory now. The team failed to qualify for an event which it once used to dominate.
On the political front, things are rotten as usual. Our so called honorable Members of Parliament continue to bring themselves further and further down in our eyes. The Cash for Votes scandal in the Lok Sabha being the latest.
The Kashmir issue still remains unresolved. Added to it we are confronted with major regional vs national debates.
Even the economy is not looking that rosy with rising inflation and slowing growth rate. We might not be able to make the big leap into the developed world soon.
We are still watching the same bad movies and nothing worth remembering has arrived in a long time.
And now on a personal front. Things have changed a lot. I have entered the corporate life. Not as hectic or fast paced as I imagined it would be but into a rather sedate and laid back approach to things. From a hostel room I have shifted into my own, albeit rented, flat. The college mess has changed to office cafetaria. Last year people around me were classmates and professors. Now they are colleagues and bosses. In more ways than one, now I am more independent. Certain rules have been removed to be replaced by some others. So, in short, life has changed. And hopefully for the better.
And as for The day... Well it still holds the same meaning for me. Its a holiday and I do not have to go to work :)
Jai Hind
P.S. This time Google seems to be in the Olympic spirit. So no picture in the post
Posted by Nishant at 11:37 PM No comments: 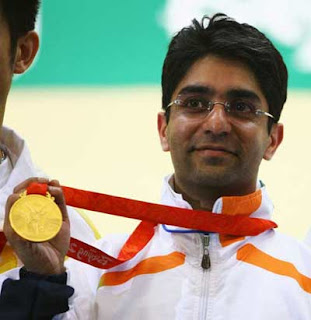 11th August, 2008
A golden day for all Indian sports lovers. For the first time in my lifetime the Indian national anthem was played in the Olympic Games. Abhinav Bindra became the first Indian ever to win an individual Gold medal in the 112 year history of the Games. By winning the 10m Air rifle event in the Beijing Oympics, Abhinav Bindra gave a perfect start to the Independence week. Kudos to him for providing a feel good feeling to the entire nation
Here is the link to the final score sheet
http://results.beijing2008.cn/WRM/ENG/INF/SH/C74A/SHM101101.shtml#SHM101101
With Rajyavardhan Rathore to follow and Saina Nehwal going great guns in the badminton singles, we can hope for more medals in the forthcoming days.
Posted by Nishant at 8:04 PM No comments: 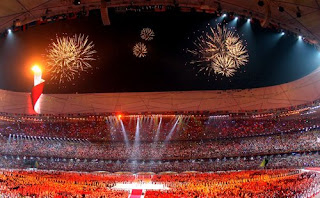 As I write this post, the world's biggest celebration has begun. Its an event lasting for 16 days but whose memories will continue to linger for a long, long time. Probably the Olympics are the only event which bring citizens from the whole world together. It is said to be a celebration of people's achievements and not just restricted to the sporting events themselves. This time it has led to opening up of China to the world, a country forever thought to be hidden behind the "bamboo curtain". China is trying to showcase itself to the world. Even the Great Chinese Fire Wall has been broken down. The Games began with a grand opening ceremony watched by the whole world in the presence of many national leaders.
The Games would hopefully be remembered for the sporting perspective only. And hoping there are no lingering controversies or disruptions. 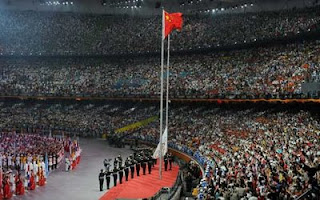 So as they say, "Let the Games Begin" P.S. From an Indian perspective lets have some memorable performances and hopefully a few (not expecting many) medals as well.

P.P.S. The Games have already begun. I am a couple of days late. But better late than never :)
Posted by Nishant at 9:54 AM No comments: