It’s time for the patriotic fervor to reach its annual peak. Also time for me to pen down my annual India blogpost. (2017 edition is here).

As one grows older and hopefully a tad wiser (albeit not in all cases), one learns that economics is more important than politics. So on that note,

The sensex is nearing record peaks, the rupee is touching new depths, meanwhile the banking sector has too many skeletons tumbling out of its collective cupboard and oil prices are back up. And we have an election year coming up, which generally means throwing away financial prudence and bringing in lots of sops to appease the vote banks. In all a perfect storm brewing up. Do we have the right captain to sail through these choppy waters and get our ship to safe harbor? That is a multi-billion dollar question!

Assam finally managed to bring up the first draft of the National Register for Citizens (NRC). It has brought interesting results. About 40 million people have been identified as non-Indians, although many have been living here for years. An exercise worth carrying out across the country as well. Although we don't know what to do with these aliens. Throw them out, but no one else seems willing to take them. And thus we have our own version of the refugee crisis. Time for some tough decisions for the policy makers.

Coming to the general state of the country. News media is a now a commodity of trade. Some would argue when it has not been. Every "news" is presented in a way to please their respective "owners". Thus we have the funny scenarios, where some try to find deep conspiracies in every government uttering, while others ask questions on why the opposition leaders are not doing anything?

Meanwhile less said about the social media the better. Some of the social media warriors have realized that the fastest way to attain fame is to sound more and more bigoted. The more radical the views, the more venom you spew, the more divisive your rantings, the more your number of followers and higher the chance of fulfilling your political ambitions. And why not, when the average citizens are willing to take up the cudgels, sometimes literally. And that's how lynchings are on the rise. After all, rumors travel fast in the times of free 4G. Also, the reason why mobile data shutdown has become the modern day curfew. (Lived through one such day recently, found it quite relaxing, the data not available issue, but that's the subject of another post).

The individual views are swinging away from the balanced moderate centre to the radical extreme. Witnessed it on social media, on college WhatsApp groups, where people seem to be gunning for fights. How did we become so intolerant of each other? Today, either you are pro-government or branded an anti-national, there is no middle path.

Meanwhile, there are groups agitating for "rights" suddenly holding up cities to ransom for myriad reasons. Reservations, loan waivers or even supposed wrong depiction of a mythical princess in a movie - the cause could be any but the sufferers are the same. Buses set on fire, roads blocked, vehicles pelted with stones. Destroying the already crumbling  infrastructure. And then nature gets into the act and starts giving  back. All our megapolises are just crumbling inwards.

Only sporting achievement manages to bring us together. And why not? As has been said, always read the newspaper back to front. The last pages narrate the success stories of man, while the others tell us of it's failures!

That's too much of rambling. Election year coming up. Let's see what it has in store for us!

P.S. A long but interesting read – Ambedkar’s speech on Mahadev Govind Ranade’s 101st birthday in 1943 . Quite a few parts still relevant today, even after 75 years!
Posted by Nishant at 9:21 PM No comments: 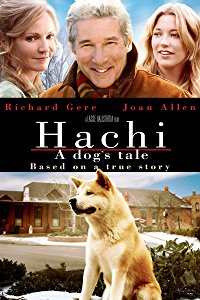 Basic Premise
A tale of a dog who keeps waiting for his human friend, even after the latter's death.

MovieNotes
It is a beautiful tale of friendship and loyalty all amalgamating into a perfect emotional tearjerker. A tale which brings life to the phrase "dog is man's best friend". And like the best of stories, it is based on a real-life incident. The real Hachi belonged to a professor in Japan. The setting has been made American but the story's essence remains the same.

Just a couple of days earlier had seen a documentary on Animal Planet on how dogs have evolved over time to become better human companions. Especially those puppy eyes, which no human can seem to resist. And thats what our star Hachi does. One look at his eyes and all humans become his friends. Cats are a different matter though, as Hachi learns very early in his life, and so are skunks!

The makers transported the setting to USA, but retained the dog's origin. This movie must have set Akita breed sales skyrocketing in USA.

India connect - The local hot dog seller at the station is Jasjit, played by Erick Avari, who is India born!

Rating - 9/10. One of the perfect movies for a weekend watch!

Previously on MovieNotes - Raazi
Posted by Nishant at 4:01 PM No comments:

Basic Premise
A Kashmiri girl is married into a Pakistani military family, to serve as a spy, during the Bangladeshi liberation movement.

MovieNotes
Except for the very end, the story is depicted in a very believable fashion. And why not, given that the book on which it is sourced is claimed to be based on real events. The book, Calling Sehmat’s author has never revealed his source, citing safety concerns to the subject.

Good performances all around and a taut script make for a good viewing. Songs are used to hasten the narration. Although, the makers love of using flashbacks as a narrative device does get a bit jarring after some time.

Pakistanis are not depicted as villains of the piece but just as an opposing side. They are not demonized, just shown as someone operating on a different set of beliefs. The movie depicts patriotism without engaging in jingoism and chest-thumping one liners – the real achievement of the movie.

The events depicted in the movie, set up the context for Pakistan’s submarine Ghazi’s failed attempt to destroy INS Vikrant. And thus setting up context to watch the movie Ghazi Attack!

Previously on MovieNotes – Deadpool 2
Posted by Nishant at 6:50 PM 1 comment:

After a 3 month gap (frequency is getting better), presenting the 3rd episode in the “Road to Tokyo” series. This episode will focus on the changes made in the events roster since Rio (there have been quite a few).

According to Mr. Thomas Bach, the IOC President, the changes have been made to make the Games “more youthful, more urban and include more women”. Based on the above philosophy, following changes were made in the Events List

New Sports
5 Sports have been added to the Olympic roster, specifically for Tokyo, taking the overall count to 33 – Baseball (for Men) & Softball (for Women), Karate (4 weight categories each for men & women), Sport Climbing (2 events), Surfing (2 events), and Skateboarding (4 events).

Existing Sports - Further many of the existing disciplines have undergone changes
Overall, medal events have increased to 339 from 306 at Rio. Of the many changes made, Indian interests would lie mainly in areas like Mixed Archery, Boxing & Shooting.

Later this month, we have the Asian Games coming up. Apart from gauging our preparedness for Tokyo, they also serve as the first qualifying events in some of the disciplines e.g. Hockey, handball, Archery, & Karate. Hopefully by the end of the Games, the Indian qualifying tally for Tokyo would have opened up.

Meanwhile, on a personal note, a few days back had the privilege of attending a session by Abhinav Bindra, our only individual Gold medalist. It was inspiring and fun! Bindra’s key message – take up a sport as a hobby and also follow sports and not just during the time of big events! So this is me, doing my tiny bit to keep the interests in our Olympic sports running!

Next edition of “Road To Tokyo” will have updates from the Asian Games. Till next time!

Links
Posted by Nishant at 7:43 PM No comments: