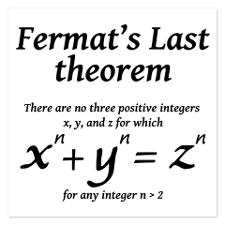 This was the theorem proposed by the French mathematician Pierre de Fermat in 1637. In the margins of the his copy of Diophantus's Aritmetica, he had left the following words

"But it is impossible to divide a cube into two cubes, or a fourth power into two fourth powers, or generally any power beyond squares into like powers; of this I have found a remarkable demonstration. This margin is too narrow to contain it."

For over 300 years, mathematicians across the world struggled with finding a proof of Fermat's last theorem. Empirical evidence could not disprove it either. But no proof could be found. The search for a proof of Fermat's Last Theorem became the quest for the Holy Grail for mathematicians. Many awards were announced for the person who cracked it. But Fermat's remarkable demonstration was not found since. In fact, it was thought that with the current available knowledge this theorem could just not be proved (or disproved).

In 1993, Prof. Andrew Wiles announced his proof of the theorem. However, soon after, an error was found in his proof. But Prof. Wiles was not to be deterred. He reworked and came back with a new proof, a year later. This proof was compiled over 150 pages and took in developments in mathematics from the 20th century (which would not have been  available to Fermat).

For his discovery of the proof of Fermat's last Theorem, Prof. Wiles was awarded the Abel Prize (considered to the Mathematics equivalent of Nobel prize) in 2016.

Prof. Wiles's proof was over 150 pages long, which explains why Fermat couldn't fit it in the margins of Arithmetia. Or maybe there is a simpler proof out there, which even the best minds have of the past four centuries haven't been able to resolve.

P.S. With this post, starting a new section in the blog title "LearnNBlog", incorporating interesting (for me at least) learnings.
Posted by Nishant at 6:58 PM No comments: 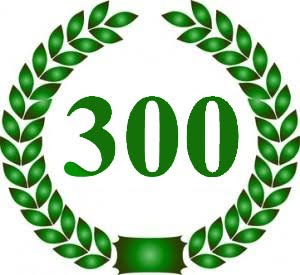 300 !!! This is the 300th post on this blog. So writing this "short" blogpost about the blog to mark the occasion.

Nishantzworld is now in its 10th year of existence. Did I ever think that the blog would still be running after nearly a decade? The honest answer would be "No". But it has survived taking its own course, going along with the times. Sometimes rapidly churning out posts, sometimes idling for a while. But the journey of the blogposts have continued. After all there is no dearth of topics to write about and the blog has churned out posts on almost everything under the Sun covering a whole gamut of subjects like movies, books, travel, politics, sports, social causes, industry news etc.

The journey has seen its own little step changes. The appearance has changed dramatically from a s simple background to a white one with posts now popping out. Meanwhile the content has also gone through changes. Cricket, which initially provided bulk of the posts, has now its own separate platform, Slipstream Cricket. There is a dedicated MovieNotes section for reviewing Movies, while reviews of books find a place under BookMarks (or basically me showing off what I have been reading). There have been plans to include travel related posts under one heading, but it hasn't taken off yet. While photography has found a better platform on Instagram.

And now for the Fab 5, a list of my favorite posts from blogs #201-299, in chronological order. (An exercise which I had also done for my 100th & 200th posts as well).
Hopefully, the blog continues towards Brian Lara's mark now. Once again, thanks to all the readers whose encouragement at different times have kept this blog going.