Title: Veerappan: Chasing the Brigand
Author: K. Vijay Kumar
Genre: Non-fiction, Biography
Published: 2017
Summary
Narrative of the how the reign of terror of the dreaded bandit Veerappan ended.
BookMarks
A slick narrative of how the Special Task Force led by the author, K. Vijay Kumar, managed to finally hunt down Veerappan, the dreaded bandit – who had spread his reign of terror for over two decades across the states of Tamil Nadu and Karnataka.
The best thing about the book – the author keeps his focus on Veerappan. Every chapter, every anecdote builds up towards the end. Crime finally does not pay, even though criminals take a lot of toll on the state machinery. And everyone’s luck finally runs out even though they may have survived many close brushes with fate.
The book keeps the narrative taut and avoids all controversy trying to focus on the facts as much as possible. Leaders are shown in positive light or not mentioned at all. (The contrast between Jayalalitha & Karunanidhi in this case). Even the nefarious elements of the society are not named (Mr. X). Instead the focus is solely on the STF personnel who waged decades long operations, making huge personal sacrifices in the process. We get a glimpse of the hardships faced by these extra-ordinarily brave men who put everything in line for their mission, in return getting meager rewards.
My favorite line from the book – “Activity should not be confused with progress”.
Another bit I liked is the use of relevant anecdotes from situations around the globe to compare with the hunt in the jungle. However, the bits when the author gives an insight into conversations and thoughts of Veerappan is a bit jarring – I mean how would he have known, unless there was a telepathic connect! But overall a great narrative!
Previously on BookMarks: Born in the Purple
Posted by Nishant at 7:48 PM No comments:

The phone buzzes, providing a necessary distraction from the tedium of another online meeting (a parallel pandemic in these Covid times).
It was a whatsapp forward! 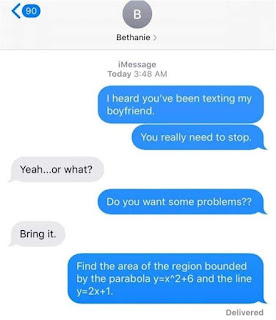 For some odd reason, instead of focusing on the joke, decided to attempt the problem asked by Ms. Bethanie. The mind jogged back to days of engineering preparation, using integral calculus to solve the area bounded by curves. After managing to correctly remember the rules of integration, found myself staring at an equation. And came to realization that the limits were missing.
The attempt to get the limits/intersection points ended up in a quadratic equation. And howsoever much I wracked my brains, had no recollection of the formula for calculating the roots of a quadratic equation! And as with most small issues Google came to the help it and I reconnected with an old friend. 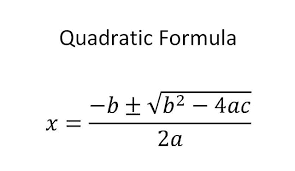 Pic – roots of a quadratic equation
Roots of a Quadratic Equation derivation
Realized that this particular equation could not be solved as the parabola and the line do not intersect. Hence the area bound is zero (or infinity), depending on how you look at it! (Link) 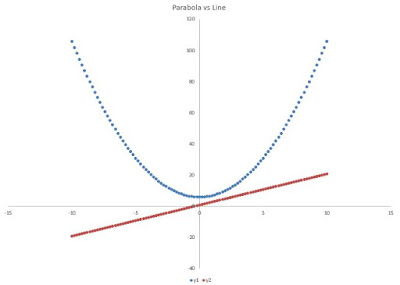 But what happened to the simple formula of quadratic equations which was a constant companion in those years of struggle - for admission to an engineering college and during engineering days. I know it has been a while but how could something just slip off (I could remember the integration part)
Most of the formulae, derivations and theorems which had been hammered in as a student has been so rarely used that they have been forgotten. Wonder what kind of commentary this is about our higher education! Or maybe forgetting the quadratic equation roots is symbolic of how disconnected we are becoming with our roots.
Hopefully the roots of the quadratic equation are now firmly back in place inside the brain. It was good to go back (with a little help from the omniscient google) to these problems instead of the real-world ones
Posted by Nishant at 7:57 PM No comments:

Email ThisBlogThis!Share to TwitterShare to FacebookShare to Pinterest
Labels: Mathematics

BookMarks #71: Born in the Purple

Title: Born in the Purple
Author: Dora Ilieva
Genre: Historical Fiction
Published: 2020
Summary
The tumultuous life story of Princess Anna of Constantinopole, a learned woman who could have been the Empress, yet had to live away in exile.
BookMarks
The book is set in the Byzantine empire in the late 11th & early 12th centuries. It is the era of turbulence in European history with Crusades going on under the direction of the Pope. The story gives an interesting insight into the motives of the knights of the Crusades. They were mostly second sons, who were looking at an opportunity the take a fiefdom of their own in the guise of this holy war! We also learn a bit about the knowledge of the era and the political machinations of the Byzantine courts.
The story is told in a series of flashbacks and herein lies the biggest flaw of this book. There is a disconnect in the narrative. Characters are built up as interesting and when we get back to them, often they are long dead in the very next passage!
The story also presents the take on the place of woman in the society (of that time). An educated woman is considered the biggest threat by those in power, especially the religious leaders. And they set in all sorts of manipulations to keep them in control. Well, maybe not too different from the current time!
Everything is about power. And a fight in the battlefield is the least preferred way of gaining one. Manipulations, marriage alliances, coups, treachery, revolts and religion are the most effective ways to gain power! And there is the uneasy alliance between religion and politics, both using each other for backing but also at the same time wary of each other! To reiterate, the more things change, the more they remain the same!
Born in the Purple is one of those books which tells an interesting narrative yet falls a bit short in the narration.
Previously on BookMarks: The Ickabog
Posted by Nishant at 7:36 PM No comments: