Weather forecasters are a much maligned lot. Nobody says that they are ever right. When they are right, nobody notices. When they are wrong, everybody does. Yet the profession has still survived. And people do check the weather forecasts.
Mumbai residents though do not need any weather forecaster. They can safely say, "It will rain the moment I step out on to the road". (during the months of June to August).
Here is a picture of a weather forecasting stone in England (found this via a forwarded mail) 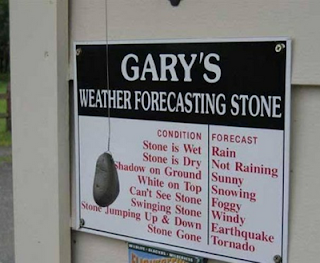 Email ThisBlogThis!Share to TwitterShare to FacebookShare to Pinterest
Labels: Random

The Language of India

A little conversation today made me wonder what is really the language of India.
I was approaching Raghuleela Mall (Vashi, Navi Mumbai) when I was stopped by a lady in an auto.
Lady: "Excuse me, is this the Inorbit Mall?"
Me: "No, Inorbit is on the other side." (while pointing towards the general direction)
Lady: "Thanks"
Now, there is nothing much said here. But the entire conversation was carried out in English, not Hindi nor Marathi. Two Indians in India holding a random conversation asking for directions in a foreign language. Just made me wonder "Is English now becoming the preferred language for general communication in India.?"
Posted by Nishant at 8:33 PM No comments:

July 18, 2010
A day trip to Lonavala with some friends. The drive from Mumbai was great and the weather was simply awesome. It rained just enough to make it pleasant without creating trouble during the drive. So our lot drove though Lonavala & Khandala, took pics and ate the famous Chikki also. Here is a little photo collection of the place. Best part of the trip, it was random and just happened.

A post about the trip would not be over if I do not mention the most popular reference, the Khandala song.

My Day of the Bandh

Monday, July 5th, 2010
Bharat Bandh called by all opposition parties over fuel price hike. The bandh could be called a success. It certainly disrupted my life a bit. I did not go to work. First time since my days in Assam has any bandh had any effect on my life. Last time it was in February, 2006. ULFA had called an Assam bandh and my flight from Kolkata to Dibrugarh via Guwahati was halted in Guwahati itself. Alternative arrangements were made to reach Duliajan next morning by road. But that is another story for some other day.
Coming back to the Bharat Bandh. I wasn't sure whether I should step out of house or not. So I did a quick SMS survey of a few friends and colleagues asking them about their plans. The responses were as usual mixed.
"In two minds, not sure, wait and watch".
"Not going, not that brave"
Some called to say they would be going.
And finally came the answer "Just reached office".
Now reading this range of response I decided to look out. The traffic was much less. I could see a bunch of policemen also. Public buses plying on the roads. Though they were fewer in number (so it seemed to me) and there were certainly less people in them. I almost made up my mind to go. But at that moment also decided to switch on the TV. Switched on to the news. All I saw was a local train being stopped, buses being pelted with stones. Our round the clock news channels were certainly making all eefforts to motivate people to stay at home by showing repeated clips of violence at public transport and the deserted roads in Mumbai. And so the mind was made up. No way I was going to go out now.
And I also wondered "By not going to work, was I a participant in the protest movement, and supporting the people who called the bandh, or had I simply taken a personal safety decision?". This question I put on Facebook and Twitter. There were a couple of interesting replies.
"Neither... you are simply bunking"
"You are not wrong"
I am not sure what, if anything, was gained out of this bandh. Seemed to me a massive exercise in futility. Nothing really happened. With no elections in the horizon, the government can simply ignore such activities. Many people took it as an extended weekend. Loss to the exchequer must have been huge though. I used up a leave.
And for the people enforcing the bandh, it must have been a really LONG day at work.
Posted by Nishant at 11:56 PM No comments:

Hand of God or Hand of Devil 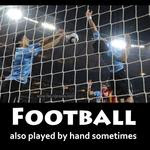 World Cup Football, 2010
2nd Quarter-Final, Uruguay vs Ghana.
Last minute of Extra-Time. The sores are level at 1-1 after 120 minutes of struggle in which the teams dominated in phases. Ghana make a last ditch effort to score the winning goal. Off a free-kick, the ball floats in dangerously in the penalty box. After multiple hits around the penalty box it is finally going into the goal, with the goal keeper beaten. But before the ball could cross over the goal line, Uruguayan player Luis Suarez blocks it with his hands and prevents it from crossing over. A deliberate handball and a foul. Suarez is immediately shown the red card and Ghana awarded a penalty. Ghanian striker hits the crossbar and the ball goes over. And the referee blows the whistle. The game went into a penalty shootout which Uruguay won 4-2 and proceed on to the semi-finals.
The Ghanian players were gutted and so were their supporters, the entire African continent. They had been denied the chance to become the first African team to reach the World Cup semi-finals by the thinnest of margins. The Uruguayans were celebrating.
The focus though was on one man, Luis Suarez. No one is quite sure whether what he did was right or ethical. It was certainly legal. He has probably made the greatest self-sacrifice in footballing history. But in doing so ensured that his team still had a chance. And it was a chance which the Uruguayans did take. Suarez did commit a foul (a deliberate one) and was duly punished also. Ghana failed to capitalise on that.  He didn't get away with cheating. He is going to miss the semi-finals but has ensured that the rest of his team doesn't.
Ghana maybe feeling cheated. Uruguayans are celebrating. But the neutral observers have been left divided. Suarez's act is in the proper grey area. He was punished for a crime but his team survived because of his crime. In one sense the perfect crime and the ultimate self-sacrifice for the greater cause.
It certainly was the Hand of God for the Uruguayans but "Hand of Devil" for all Africa.
Posted by Nishant at 5:46 PM 1 comment: