Its only a game

17 march, 2006
A couple of huge shocks in the cricket world
Bangladesh beat India by 5 wickets
Ireland beat Pakistan by 3 wickets (on St. Patrick's Day)
Two unexpected and stunning results. But the reaction in the countries involved over the next 24 hours was only expected. There were huge celebrations in Bangladesh and Ireland as expected. In India, Dhoni's home was attacked while additional security had to be put up at the residences of the other players. In Pakistan it was much worse. Some even demanded the desolution of the cricket board and called for the arrests of the officials and players. The events culminated with the news of the tragic death of Bob Woolmer, the highly respected coach of Pakistan, who was found dead in his hotel room. Maybe it was the result of the stress caused by the defeat. Is this the price that people have to pay because they are passionate about the game they love. There were many reactions to this news. But one was really touching. This from a man in the Hospital in which Woolmer had been admitted.
"Da coach who die? Maybe he take it to heart? Even da biggest team can lose to little team, man. It a game, and da ball round."
People here tend to forget this simple premise. That cricket is not a matter of life and death. Its only a game after all.
Posted by Nishant at 6:42 PM

Email ThisBlogThis!Share to TwitterShare to FacebookShare to Pinterest
Labels: cricket

Was going through the past few posts. Seems like the blog was turning more into a movie critic thing. So decided that I need to put in some more glimpses of my campus life in it. So here goes
The Day: Sunday, March 4, 2007 (Holi)
It was the last day of a 6 day period with no classes (due to the ongoing placements of the senior batch). And it was the occasion of Holi too. I have been out of my home for the last 6 years but somehow had never celebrated Holi in campus. Either I was at home or in transit which was the case last year. So it was my first campus Holi. Overall experience not bad though no one enjoys colour being rubbed, pourn or thrown on yourself. It was followed by what can only be described as a topless dance. A look at the picture should make things clear. Who would expect this bunch of semi-naked people to be students of the one of the nation's premier B-schools. But then thats what we are. 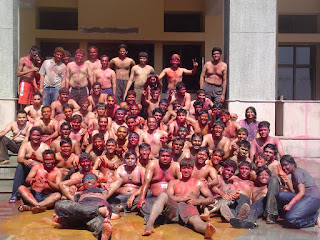 Men in Blue...and a Billion Hopes

The Men in Blue left for West Indies for the 9th Cricket World Cup. Will the 24 year wait end this time or will it be another failure. But one thing is certain over the next 2 months most eyes will be on the action in West Indies. With the time difference being what it is, most will be awake most of the nights, more delays in the morning. But there will be a sense of accomplishment if the result is what we hope it would be. Though considering Team India's form over the last year maybe this would be hoping for too much. But with the so called glorious uncertainities of the game, one can only hope for the best. So all eyes will be on Dravid, Sachin, Dada, Veeru, Yuvi, Dhoni, Karthik, Uthappa, Agarkar, Zaheer, Munaf, Sreesanth, Pathan, Kumble & Bhajji as they make their attempt for the greatest glory in sport. After all they carry the hopes of over a billion Indians. Wishing Team India the very best. Hope the 24 year wait ends.
Posted by Nishant at 3:27 AM