BookMarks #28: A feast For Crows 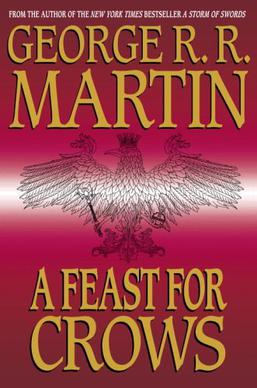 Summary
At the Citadel in Oldtown, the maesters hear rumors of Denerys and her dragons. One of the apprentices is duped into giving off the archmaester’s key to a stranger.

At the Iron Islands, Balon Greyjoy dies and his throne is claimed by his brother Euron and daughter Asha. Euron takes over the throne ahead of his brothers and starts harassing the rest of Westeros.

In Dorne, the Sand Snakes, daughters of Prince Oberyn seek vengeance for his death. Oberyn’s brother Duran thinking of their potential rebellion puts them in custody. Duran’s daughter Arianne wants Princess Myrcella to be crowned as the sovereign. However, her plans are thwarted by Duran and Arianne is imprisoned while Myrcella is injured.

Post the murder of Lord Tywin. Cersei and Jaime discover Tyrion and Varys have disappeared from the King’s Landing. Cersei tries to fill her loyalists in King Tommen’s council. Margery Tyrell and Prince Tommen are married. Cersei brokers peace with the sect of Sparrows and the High Septon by agreeing to let them raise an army of Faith Militant. Cersei tries to implicate Margery for adultery. However, her plan backfires and she is imprisoned.

Jaime is despatched to take over the Riverlands from Brynden Tully, taking Ilyn Payne & Addam Marbrand as his companions. On the way, Jaime learns that Lancel has become a member of the Sparrows faith. Jaime reaches Riverrun and attempts to negotiate with the Brynden. He learns about Edmure Tully being kept hostage and having a child on the way. He releases Edmure and in persuades him to give up Riverrun in exchange. Meanwhile Brynden manages to escape during the handover.

Sam is sent by Jon to the Citadel to become a Maester, alongwith Gilly, her son and maester Aemon and Dareon. On the journey, Sam learns that Jon had swapped Gilly’s son with Mance Rayder’s. Along the way, Aemon passes away. Sam reaches Oldtown and tells the stories of the Wall to the Maesters.

Arya reaches Braavos and finds her way to the House of Black and White, a temple of the many-faced God. She serves in the temple and learns selling oysters in the city. All the while trying to become no one in the company of the waif and an old man. On her trips outside she runs into Sam and Dareon. On finding that Dareon has deserted the others, she kills him. Next day, she wakes up blind.

Brienne continues on her quest for Sansa Stark. On the way she is joined by Podrick Payne, who was earlier Tyrion‘s squire. Brienne and Pod are captured by the Brotherhood Without Banners, where they are presented to Lady Stoneheart (Catelyn Stark brought back to life) for sentencing.

At the Vale, investigations into the death of Lysa Arryn are carried out. Lord Baelish passes on the blame to Marilion, which is accepted by the Knights of the Vale. Baelish plans to marry off Sansa (known as Alayne) to gain control of the Vale.

BookMarks
4th Book in the series “A Song of Ice and Fire” following A Storm of Swords. Also provides the basis for 5th and 6th season of the shows. Although, now the stories seem to have almost nothing in common except the names of the characters.

Funnily it covers only half of the lead characters of the series. We don't see Jon or Daenerys or Tyrion. However we are introduced to Dorne and the Greyjoy wars.

Onwards to A Dance of Dragons now

Previously on BookMarks: Angels and Demons
Posted by Nishant at 5:00 PM No comments: