Email ThisBlogThis!Share to TwitterShare to FacebookShare to Pinterest
Labels: Hindi 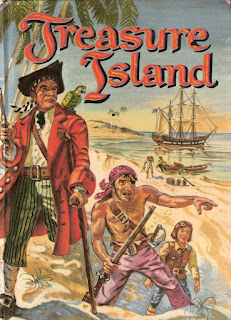 Summary
Jim Hawkins is a pub-owner's son. One of the residents is an old sailor, who is worried for the contents of his chest and keeps Jim as a lookout. He is visited by his old shipmates and suffers a stroke and dies. Jim finds a map in the sailor's chest and takes it the local physician Dr. Livesey, after escaping a search of the pub from the sailor's former fellows.

The Doctor believes it to be a map showing treasure buried by pirate Captain Flint. He enlists the squire, Mr. Trelawney, who plans to buy a ship and go in hunt of the treasure. They take Jim along with them. Trelawney hires a crew to manage the ship with Long John Silver, a one legged fellow with a parrot as the ship's cook. Captain Smollett is in-charge of leading the ship but he is wary of Silver and the rest of the crew. As they approach the island Jim manages to overhear Silver's plans of mutiny and warns the Doctor and others.

Once the ship reaches the island, the mutiny is out in the open. Jim and his friends are heavily outnumbered by Silver's crew. At the island Jim runs into Ben Gunn, a marooned sailor, who was part of Captain Flint's crew, who agrees to help him. Jim's friends in the meantime abandon the ship and take fort in a stockade at the island. Jim rejoins his friends and Silver's men take control of the ship. Both sides suffer losses in the battle that follows.

During the night, Jim quietly goes to the ship and cuts her anchor, making her drift away, but has to get onboard to prevent being drowned himself. With the aid of the remaining mutineer on the ship, he steers it into a secluded area. In the ensuing fight, he kills the mutineer and makes way back to the stockade only to discover it having been taken over by Silver and his men and with no signs of his friends.

While the others want to kill Jim, Silver saves his life. The next day the crew alongwith Jim go in search for the treasure. On reaching the spot they discover that the treasure has already been removed by Ben Gunn. The Doctor and his team had met up with Ben Gunn and attack Silver's party. Silver tags up with them while the remaining mutineers are abandoned on the island.

On the return journey, Silver gives them the slip having made off with a share of the treasure.

BookMarks
An action adventure tale which has become the basis for nearly every pirate tale. A book which has been in my to-read list for ages now. Finally managed to complete it.

It is also a sort of coming-of-age story where a 15 year old boy goes on an adventure. He does things on impulse, which sometime land him in trouble and sometimes bring good fortune to his friends.

Previously on BookMarks: A Game of Thrones
Posted by Nishant at 7:47 PM No comments: