The Bihar assembly election results are out. The ruling JD(U)-BJP alliance has returned to power with an overwhelming majority. Winning 206 out of 243 seats says a lot about the faith that people of Bihar have in this government. The reasons for this are not too difficult to fathom. The previous five years have given sufficient evidence that we can have hope.
I was in Patna during Diwali at the time of  the 5th round of voting. Now being an occasional visitor, I saw for myself what people/media have been talking about. There are definite signs of development in and around Patna (I can’t say about other parts). Infrastructure is improving, the roads are better; there are flyovers everywhere in Patna. Even the cinema halls & markets have improved and seem a bit cleaner. Having had Ram Vilas Paswan, Nitish Kumar & Lalu Yadav as Union railway ministers has ensured that Bihar has the best rail connectivity in the country. Air connectivity has also improved tremendously. But the biggest change has been in the perception of the law & order situation in the Bihar. This has been the one area which the Nitish government can take full credit for. People can think of staying out longer. Overall lots of positive signs are there.
Now, for a list of requests that I have for the Nitish government. (A friend has already covered quite a few points here)
1. The Bihari Self-Respect
For all practical purposes, I have been a non-resident Bihari within the country for quite some years. "You don't sound a like a Bihari" is a statement people make thinking that its a complement when actually it feels like a slap in the face. People talk about Bihar as the byword for everything associated with lawlessness & backwardness. For the first time in many years people are referring to Bihar with a positive note. It’s no longer just another running joke for the country. And yes, it does feel nice to be associated with a state where words like development, education, growth are mentioned rather than poverty, kidnappings and lawlessness. We have a habit of living in the past. We refer to our glorious history when Pataliputra was the cultural, political capital of India. But those days are long gone. And we need to build from the present. Please ensure that the Bihari self-respect is no longer attacked.
2. Alternate Urban Centres
It is good to know that new educational institutions are being opened, industries are being setup, investors are coming to the state. I have a request. Please do not open these in Patna. The city’s infrastructure cannot sustain so much growth. In fact it is more likely to hamper the growth. Alternate urban centers will definitely prove a good idea. Rajgir can be a good starting point, though I am no judge in these matters. A state cannot develop in patches.
3. Traffic & Public Transport in Patna
The number of vehicles has increased while the existing roads can’t be widened any further, resulting in traffic jams everywhere. A good starting point can be removal of cycle rickshaws from the main roads. This proposal would be met with huge uproar. But if implemented will certainly ease up the traffic. Given that no elections are scheduled in a long time, now should be a very good time to take this step. Also a revamp of the bus services will help. The Indore model can certainly be one of the options.
4. Cleaner City
A lasting memory for anyone visiting Patna is of a paan-stained city; government offices, shopping complexes, roads everywhere it’s the same. I can’t suggest how to improve this though, except heavy fines.

5. Education
Bihar has the lowest literacy rates in the country. And to aim for development, education of the masses is the very first step. And this has to done at all levels starting from the primary sections and not just by having an IIT or IIM in the state.
So these are my requests from the new government of Bihar. And I have written this blog because I have Faith. And to end, all I can say is Nitish Kumar would do well if he just remembers, “With Great Power comes Great Responsibility”
P.S. These are my personal views.
P.P.S. It seems funny to talk about change after having re-elected the incumbent government.
Posted by Nishant at 4:09 PM 1 comment:

Email ThisBlogThis!Share to TwitterShare to FacebookShare to Pinterest
Labels: Bihar 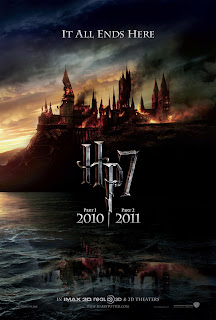 Its the beginning of the end.
Thats what the promos said. And it was a good beginning. The last book of the Harry Potter series has been split into 2. A good decision, I must say as the films have not bee able to cover the details in the limited time. Except for "The Sorcerer's Stone" & "Chamber of Secrets", the rest have deviated widely from the storyline.
Deathly Hallows Part-1 sticks closely to the story for most of the parts with minor deviations in the detail. There were parts which could have been scary, but for people (like yours truly) who have "studied" the books it wasn't. In fact the biggest suspense was at what point would they break off.  And it is a movie made for Potter buffs
Some highlights of the film
But the real fun was in watching the film with another HP-crazy fan. Pointing out the deviations from the book, predicting the dialogues, waiting for the action scenes to arrive. But there was a minor irritant in the presence of Muggles (non Potter readers) in the hall. They had neighbours who were willing to help them out by explaining what was happening, and adding to the noise level in the theatre.
Now waiting for the July 2011 release of Part-2, which promises to be action packed. Also in all likelihood, the end of end.
Posted by Nishant at 4:15 PM No comments:

Following thoughts are collected from random sources. Readers (if there are any) are requested not to draw any conclusion about the author﻿ from these ramblings.
(From a Facebook status message)
"I will never ask you to be with me... but I will always wonder what could have have happened had it been "We"?"


This reminded me of the following lines from Silsila
मैं और मेरी तन्हाई
अक्सर ये बातें करते हें की
तुम होती तो ऐसा होता
तुम होती तो वैसा होता
तुम ये कहती
तुम वो कहती
तुम इस बात पे हंसती
तुम इस बात पे हैरान होती
मैं और मेरी तन्हाई....
Loosely translated (Me and my loneliness often wonder what would have happened if you were here. You would have said this, you would have talked about that. You would laugh at this, you would be surprised at that).

Posted by Nishant at 3:54 PM No comments:

Email ThisBlogThis!Share to TwitterShare to FacebookShare to Pinterest
Labels: Random

It was a short trip. 3 day official holiday combined with 3 days of Casual Leave (Aside, I love the term "Casual" Leave). And I went to a flying trip home for Diwali. Did not expect much to happen in this short period but yet it was full of interesting little nuggets.
It was a total of 6 days, fun filled, slightly dull for some time, but lots of happenings.
Posted by Nishant at 3:44 PM No comments:

Meetings: The Practical Alternative to Work

I don't have anything to say. The picture says it all. 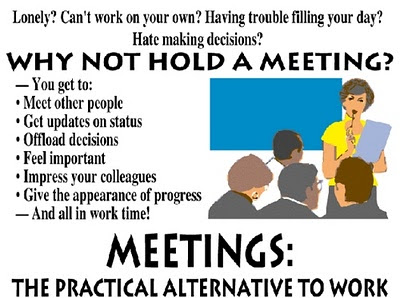 Posted by Nishant at 2:41 PM No comments: