The past week was full of news. Some bad, the Investment-Banking industry and some good, the great news about the Indian oil & gas sector. The week ended with another bomb blast on a Saturday, this time in Islamabad. However this post is not about any of these events. Thanks to the torrent downloads, I am now updated with all the happenings in the movie world. And it has been quite a while since I wrote about any movie.
Just finished watching the new Shyam Benegal directed film, "Welcome to Sajjanpur". The film is seen through the eyes of the central character, Mahadev, played by Shreyas Talpade who is an aspiring novelist. However he ends up becoming a letter writer. And we get to see the variety of things he gets to do being one of the few literate people in the village. He also abuses his position but manages to do the right things in the end.
A slightly different kind of movie from Shyam Benegal. This is set in a small village in the Hindi heartland. The film also touches on a large number of social issues, like widow remarriage, superstitions, organ selling, muscle power in local elections, the third gender, village infrastructure etc. These are mentioned in passing but the focal point remains the letter writer.
And finally acouple of random thoughts which crossed my mind while watching the movie

Overall, the film is definetely worth a watch

It was some Saturday for the financial markets. Three major shocks in one day, Merill Lynch being taken over by Bank of America, Lehmann Brothers filing for bankruptcy and AIG suffering huge losses. AIG was rescued by the money pumped in by the Fed which for all practical purposes has taken over its control. And all these after the recent collapse of Bear Sterns, Freddie Mac and Fannie Mae. Citigroup has had its value eroded by a large extent. All of these companies seemingly the victims of the sub-prime lending crisis in the USA. The recent collapses come just as the world was on a recovery path from the crude price shock.
During my B-school days, most of the people had come with dreams of becoming an investment banker after completing their MBA. Being placed in Merill Lynch or Lehmann Brothers would have been a dream come true for most people. These investment banks had also built up a reputation of taking the "toppers" only which implied solid acads and excellent communication skills. As time went by people became aware of the other profiles available and moved on to other profiles also. But still being an investment banker was the job.
When I was in second year the sub prime crisis had started taking toll with fears of the oncoming global recession whch would lead to lower packages. However these fears came out to be largely unfounded and the placement figures reached new heights. However six months down the line, it seems that those fears are coming true. With even the big banks collapsing and being taken over, there have been huge job cuts. The finacial markets are down and this may lead to the smaller firms also shutting down. Cost Cutting and downsizing has become the buzzwords across all the sectors. Reports are coming daily of companies cutting jobs or being taken over.
And where does this leave the B-school jobs. During my two year stay at Planet-I, I never worried about not getting a job. And in fact got the exact kind of profile that I had been looking for. But given the current situation, this may not be the case now onwards. The market has to absorb the people who had their jobs cut and the batches passing out from the B-schools. And so the competition would be more while the jobs are getting reduced. The salary figures and packages are expected to go down and new profiles will have to be explored. And quite a few compromises would have to be made.
Situation definetely looks grim, with more and more rumors circulating (I was chatting with a friend who told me that he had heard from some knowledeable person that ICICI was about to go bankrupt due to its dealings with Lehmann). However it is not that bad speacially in India. The growth rat would be lower but still healthy and with the reduction in crude prices, inflation would also be coming under control. And quite a few people would be coming back to India, maybe a reverse brain drain will be take place.
All I can say is lets keep the fingers crossed and hope for the best.
P.S. A friend's post on similar lines is here
http://thedopetimes.blogspot.com/2008/09/career-advice-in-difficult-b-school.html
Posted by Nishant at 10:12 PM No comments:

Another week ends and comes another Sunday. The one thing I really do not like about my current job is the 6 day week. Although I maintain strict office timings and havent had to put in too many extra hours on any week day, every Friday comes the bad feeling of missing one rest day. Every Friday, I see the "Weekend :)" status on various gtalk accounts, I still have another day in the office remaining. My week comes to an end late on Saturday evening. With the 6 day week there are many things left over to do on one Sunday. And things really have to be planned out well in advance. And given Mumbai's pathetic and unpredictable weather, plans generally have gone haywire.
After 6 office days comes a Sunday and it has a really lazy feeling about it. Like today morning. I woke up, saw that it was still raining and decided to get back in bed.Then realized that some thinga needed to be cleaned up. Clothes put in washing machine, room rearranged a bit and time for the computer to be put into action. Opened the same old set of webpages, orkut, gmail, facebook, yahoomail, cricinfo and google news. Read the stories of the bomb blasts in Delhi which are now happening with alarming regularity and some other stuff. Have been advised not to venture out too much after the blasts. But then who would want to in this weather. As I write this it is still raining. And being in Navi Mumbai, the places I can go to are the nearby four malls. And as my laptop speakers are not working, I think the best way to spend today would be to just go back to sleep.
Posted by Nishant at 10:24 AM No comments:

It seems some people in this world have nothing to do. So they RESEARCH. As the word itself implies they re-search, search for something which has already been done before. And come to their own new conclusions about this world. Or maybe assume something to be true and then let the world know about it. There have been some quite some weird researches and findings in this regard. Here's another weird research which I found while surfing. According to it alcohol "helps" in remembering the "good times". Another so called benefit of alcohol.
"Researchers have found that people who drink are more likely to remember the good things and least likely to recall the bad things, say, the worst experiences of being drunk in a party as alcohol affects memory in a selective manner."
Here is the link to the full text http://www.rediff.com/news/2008/sep/10alco.htm
Posted by Nishant at 11:53 PM No comments:

The World of Comics 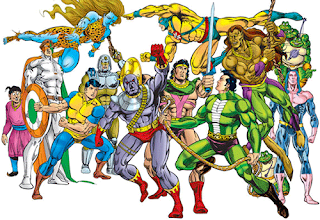 I have found a new world. Or to be more accurate have got renewed my acquaintance with a long lost world. The world of comic books. It was the early nineties when I had got hooked on reading comics. And my reading covered the entire range of the hindi comics available at that time. Whether it was the slightly kiddish collection from the Diamond Comics (Chacha Choudhary, Billu, Pinki.... )group or the slightly grown up version from the Raj Comics (Super Commando Dhruv, Nagraj, Bankelaal, Parmanu ..... )stable or the bit more grown up editions of Indrajaal comics (Phantom, Mandrake etc) I would eagerly read all of the them. Of all these my favourite was undoubtedly Super Commano Dhruv, whose most endearing feature was that he did not have any super human abilities and relied totally on his brain power to overpower his opponents. I eagerly awaited the release of new Dhruv comics, speciall the ones in which he comined with the other Raj Comics superheroes mainly Nagraj. My comics source was a local neighbourhood shop which gave out the comics on rent. In parallel I moved from Champak to Nandan to Suman Saurabh.
However as time passed, slowly this attraction towards comics passed as my reading habits changed. The major change was in the language. From Hindi I went on to English. First came the abridged classics, then moved on to Enid Blyton, later to Hardy Boys. As time passed, came authors like Agatha Christie, Desmod Bagley and Alistair Maclean. This was followed by a very lean period in which my reading dwindled. The novels were now few and far between picking pace at times and dropping off completely at others. Now it was mainly the modern writers like Michal Crichton, John Grisham, Jeffery Archer.
And then came J.K.Rowling. I give her total credit for arousing my interest in reading again. I awaited the Harry Potter books with the same eagerness like the way I used for the next Dhruv comics book. Only the waiting period here was much longer. To fill this time I started exploring other options, specially the works by Indian authors in English. In the meantime also read some of the Hindia classics. And now I have been reading up on everything that I can lay my sight on.
Some time back I found a website with the links available for all the Dhruv comics. It was like an entry point to the old times. Since then I have downloaded all the available releases. Re-read the old ones and caught up with all the action which I missed over the last few years. The comics have also changed and tried to keep up eith the modern times in their looks and appearance. But as they say "अब इनमे वो पुरानी बात नही रही". But who cares, I love downloading and reading them.
At present I like the following Nagayan series by Raj Comics , The Virgin Comics new entries, and the weekly comic strip Arbit Choudhary (http://www.arbitmba.com/).
Posted by Nishant at 10:29 AM 2 comments:

This is in continuation with the previous post. The current situation in the state remains grim with the flood waters not expected to recede for some time. The relief operations are going on but are not in full swing. The breach in the embankment is being plugged but not much progress has been made. But the main issue of the human tragedy remains. People are still stranded without food and no drinking water.
Here is a link to an article which echoed my thoughts on the current and the general situation of Bihar.
http://www.ibnlive.com/cfs/blog/52668/2017
Posted by Nishant at 10:03 PM No comments: