Title: Avengers: Infinity Wars (IMDB)
*ing: Thanos, The Avengers, The Guardians of the Galaxy, The Black Force, Peter Dinklage (the king of dwarves) and many more
Directed By: The Russo Brothers
Language: English, with a dash of Groot.
Genre: Fantasy, Comic Books, MCU 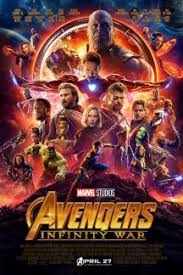 Preamble
The most ambitious movie crossover ever with the largest assembly of superheroes coming together culminating 10 years of development of the Marvel Cinematic Universe (MCU).

Basic Premise
Thanos seeks to bring together all six Infinity Stones, to enable fulfilling his mission to reduce the universe’s population to half, so that the other half can sustain on the remaining resources. The superhero team from across the universe joins forces in an attempt to stop him.

MovieNotes
(Alert: Spoilers Galore – Not that it should matter anymore, after all it has been weeks since the movie released)
First, take a deep breath
Comicbooks are supposed to be fun with the heroes prevailing over the villains and everyone living happily ever after. But our bunch of Avengers just can't seem to catch a break!

What a story and what a movie (yes these are two different things). A movie full of familiar superheroes and yet the villain is the protagonist. Thanos has a motivation greater than from creating havoc or personal gain. He wants to make the world a better place! Believing that the universe is overcrowded [Aside - a belief shared by everyone who spends considerable time in their commute], he wants to take drastic measures, which involves removing every other living thing from the universe at the snap of his fingers! Whether one survived the snap was a totally random event without any bias or prejudice. And thus we have the stunning end (no one saw that coming) where Thanos actually achieves his objective and every other living creature just fades away! Even the end-credits say “Thanos will return”

Questions, and more Questions
Are they really dead? If they are, this is a bigger carnage than the Red Wedding. Seems unlikely, given the other announced films (unless they cover events prior to Infinity Wars). If they are not dead, where have they disappeared to? How will they return (as seems likely)? Is time travel involved? If yes, as it is likely to be, it is a lazy way out and always unsatisfactory way of closing things out (Honest exception – Harry Potter & the Prisoner of Azkaban)

Now that he has achieved his mission of “removing” half of the universe’s population, what does Thanos do next? Does he sit on his throne, wait for the population to grow back to a certain level and snap again? Or does he use the soul stone to resurrect his loved one (if resurrection is possible, that is, and the sacrifice can be undone?)

Does the Snap destroy all living creatures (including trees and animals) or just human beings and related ones (it does affect Groot)? If yes, then we have half the population left with half the living resources, but with more individual space!

The missing ones – Where were Hawkeye, Antman, Wasp, Valkyrie, Mordo, Hela, the Ravagers? Did they survive the carnage? Will they have a role in the next installment? How convenient for the Marvel producers, any Contract dispute, and the character is just “snapped” off!

Why did Dr. Strange not use his power? After all, he managed to bore Doramammu to submission. He envisaged only one scenario of stopping Thanos. But just handing over the stone seems quite a convoluted way of stopping him.

Why can’t Dr. Bruce Banner change into Hulk? Is it a new trick from the master of trickery, Loki himself. After all, Loki dying in the opening minute of a movie, just doesn’t seem right.

Where did the fighting rhinos of Wakanda disappear? And could they not have closed the gap in the dome after a while?

Learnings (or not)
Others
And now for the long wait…
2019 can’t come soon enough. The Game of Thrones will come to its epic conclusion and so will the Avengers! Hmmm… it’s a long year’s wait for the fandoms.

Rating – 9/10. For delivering on the hype. And making you eagerly await the next installment.

Previously on MovieNotes: Three Billboards Outside Ebbing, Misssouri
Posted by Nishant at 5:17 PM No comments:

“Because it’s there… Everest is the highest mountain in the world, and no man has reached its summit. Its existence is a challenge. The answer is instinctive, a part, i suppose, of man’s desire to conquer the universe.” - George Mallory 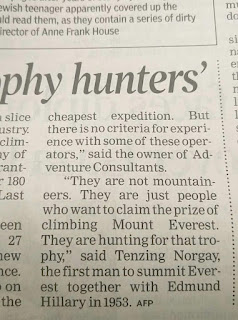 As part of the daily ritual, started the morning by flipping through The Times of India. Mostly filled with political stuff, which I ignored. Ended up reading an article on Everest “Trophy Hunters”. Basically people with more money than actual climbing experience, who are using Eeverest tour operators to pay their way through knocking off the achievement of having climbed Mt. Everest. It had quotes from Guy Cotter (he is also featured in the movie Everest), a New Zealand based adventure tour operator. And then comes the concluding paragraph in the print edition.

“They are not mountaineers. They are just people who want to claim the prize of climbing Mount Everest. They are hunting for that trophy,” said Tenzing Norgay, the first man to summit Everest together with Edmund Hillary in 1953.

Now Tenzing Norgay passed away in 1986. So there was no way, he could have given this quote in 2018. And it could not have been an old quote either as Everest commercial climbing became a business only in the 90s! Unless, the reporter was time traveling or just using quote generators!

Now, we live in a world increasingly filled with “fake news” and propaganda. But why would anyone put in a fake quote? Turns out, the truth was a little less complicated. Times of India had run out of column inches and just ended the story at that point with minor edits! The actual article as per the News Agency AFP read:

"Nowadays people can go on the internet and buy the cheapest expedition onto the mountain. But there is no criteria for experience with some of these operators," said the owner of New Zealand-based Adventure Consultants. "They are not mountaineers. They are just people who want to claim the prize of climbing Mount Everest. They are hunting for that trophy."
Tenzing Norgay, the first man to summit Everest together with New Zealander Edmund Hillary in 1953, only reached the top on his seventh attempt.
Today amateur climbers expect to do it on their first try, prompting many to take higher risks blinded by "summit fever" and lulled into a false sense of security by the thousands who have succeeded before….

So who do we blame for this glaring editorial stupidity? Just goes to show how much Ctrl-C, Ctrl-V goes on in the journalistic world? How careless our news sources can be? Little knowledge is dangerous. And in the wrong hands, it can become downright perilous.

P.S. And why this fascination with climbing Everest? I guess, as the legendary mountaineer George Mallory had said “Because it’s there”.

P.P.S. And all this while I thought this was a quote by Sir Edmund Hillary. Well, we all learn something new everyday.

Further Links:
Previusly on Learn N Blog: Few or A Few
Posted by Nishant at 7:49 PM No comments:

It's been eight months since I wrote the first episode in the "Road To Tokyo" series (which still comprises of that solitary post. Marvel folks make movies faster!). Had promised myself that I would write more regularly about India's preparations for the next Olympics at Tokyo in 2020. For different reasons, mainly general laziness and other distractions competing for the limited resource, that is time, somehow was not able to complete my second post so far.

Originally had planned for the second episode to be about the changes made to the events schedule from Rio (and there have been a lot). However, while I dilly-dallied in my write-up, we witnessed our first big event in the "Road to Tokyo", the XXI Commonwealth Games (CWG) at Gold Coast, Australia. So instead, chose to write on India's performance at Gold Coast and what we should read from it.

To be honest, we focus too much on the CWG. I guess, primarily due lots of medals pouring in from every direction during the course of the Games, a rare sight for an Indian sports fan at any multi-disciplinary event. However, given the overall level of competition it should be treated just as we treat the frequent tri-nation cricket tournaments. A feel-good factor on winning but it is not the World Cup or Champions Trophy. In my opinion, the CWG are a good warm-up event for the Olympics. Given their timing, two years before the Olympics, they also provide an opportunity to evaluate and undertake mid-course corrections in the four-year journey.

So what can we take out from India’s performance? India won 26 Golds, 20 Silvers and 20 Bronze medals to finish 3rd in the medals table. This was a marked improvement from Glasgow where we had 15 Golds, 30 Silvers & 19 Bronze Medals to finish 5th. The increase in the Gold medal count was especially heartening to see.

Amongst the sports which are a part of the Tokyo roster, India got medals from seven major disciplines - Shooting, Weightlifting, Wrestling, Boxing, Badminton, Table Tennis and Athletics. We also got medals in Squash, but that didn’t make the cut for Tokyo.
Now for the lows
Overall Gold Coast was a happy hunting ground for the Indian contingent. But the real test is to come in Asian Games later this year. Also, qualifications for quite a few of the disciplines would begin in earnest. And that’s when we would well and truly be on the Road to Tokyo!

Links:
Posted by Nishant at 7:07 PM No comments: