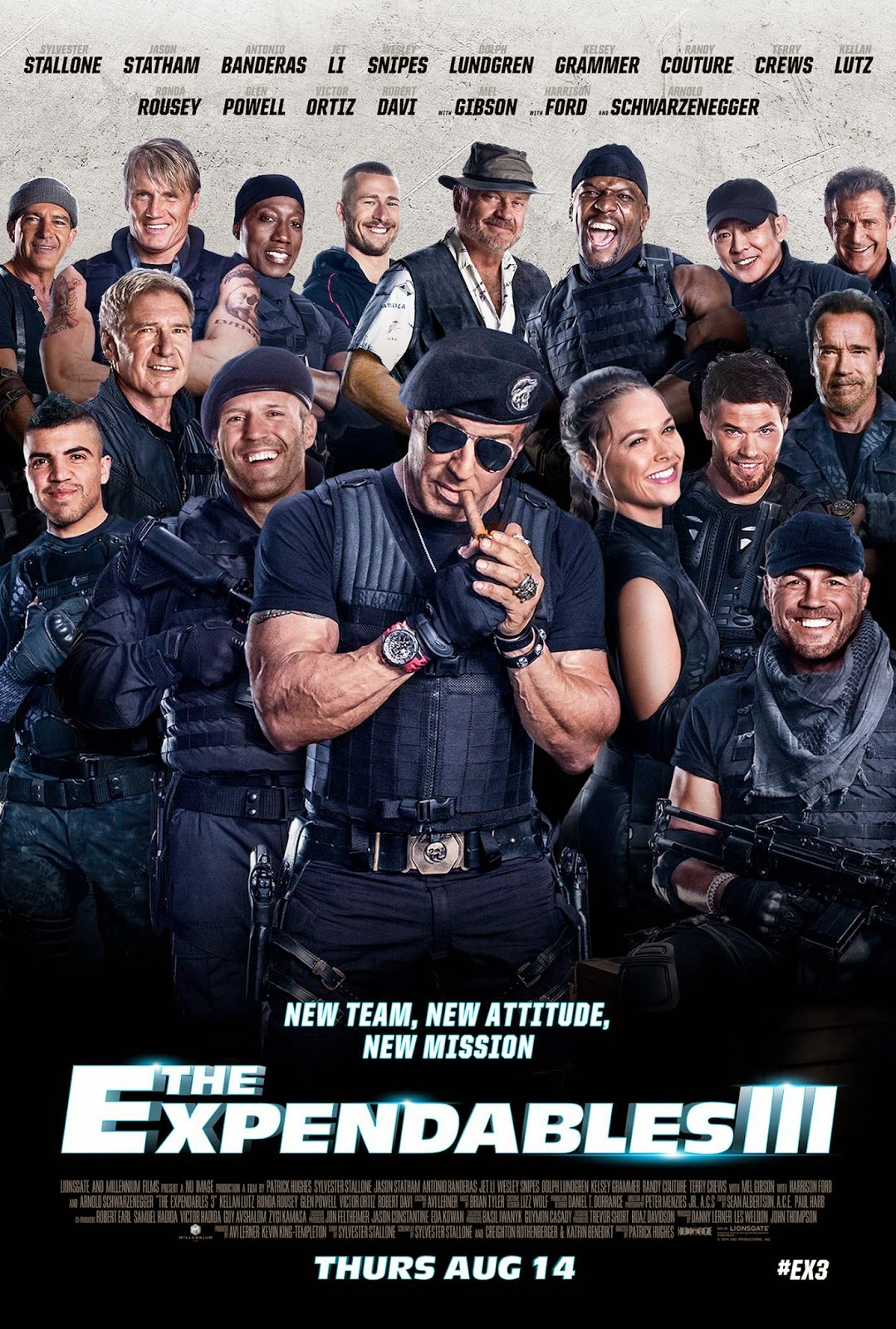 Preamble
The 3rd part in the Expendables franchisee. Sequel to Expendables 2. The movie which spawned MovieNotes - the only separate section in this blog.

Basic Premise
The Expendables are hired by government agency for a job, which doesn't  go too well and opens up old wounds. After lots of gunfire and explosions, revenge is taken and the chapter closed.

Movie Notes
Important Questions - Is there an Expendables IV in the pipeline? If yes, When is it releasing and who are in it? Personally I would like to see all the former James Bonds together as a super-villain set.

Rating - 7/10. Entertaining and easy on the brains.

Previously on MovieNotes - Kick
Posted by Nishant at 8:53 PM No comments:

14th of August. The eve of Independence Day. And I continue my little tradition (now in its 8th edition) of having a little post on the year gone by for India. (2013 edition is here).

We have officially added a new state with the splitting of Telengana from Andhra Pradesh. The formation has just given further fuel to voices demanding further states reorganization, some on administrative grounds, some on purely emotional or for political gains. Waiting to see if there are any more additions in the next year.

We had our biggest festival - the elections. The elections were ugly, long and frankly tiring and marked by an unending torrent of allegations and counter-allegations. The expected government change happened, though the magnitude of the rout of the UPA wasn't imagined. The people voted out the corrupt in the hope of the promised "achhe din".

Now have the "achhe din" really arrived? Well, too early to say. That will be the subject of next year's state of the nation post. But there is hope (which is simultaneously a beautiful and dangerous thing). At least the stock markets thought so. And social media certainly rejoiced.

Media is becoming more and more a propaganda tool. The "reported" news has multiple versions suited to fit your political/religious beliefs. Stories are being "presented" as per the most marketable version depending on the target audience. Social media, especially Twitter & Whatsapp, is becoming even more damaging with lies/untruths/rumors propagating at the speed of light.

Never knew there were so many authors amongst our bureaucrats and politicians. Anyone and everyone is now writing a book with "inside" stories. And there are more in pipeline as counters to the ones already published.

The Aam Aadmi Party proved to be the biggest disappointment. Their performance in the Delhi state elections gave a hope for a potential change in politics. But instead of capitalizing on the faith reposed in them, AAP moved on to become like any and every other political party. And the party got nearly wiped out in the General elections. From a party of hope to a party of antics and drama, the fall has been swift.

Imitation is the best form of flattery. And most of the action on the sporting front proves it. Every sport, hockey, badminton, football, tennis and even kabaddi are now running their own IPL style league copying cricket's format. Finally, learning something from cricket rather than blaming it for all their "woes".  The performance on the field in the Commonwealth Games shows continuing signs of improvement though the antics of officials off the field show that more the things change, the more they remain the same.

100 crore club is the new definition of a "hit" film. And the entrants in these clubs are not the ones which would appear on anyone's favourite movie list.

But all the gloom and doom can wait, because we will celebrate our national day.
Happy Birthday India. And wishing that your & our "achhe din" arrive soon.
Posted by Nishant at 4:05 PM No comments:

At first glance, seems a big drop in results over the 4 years. But if we go into the details, a better picture of the Indian sports scene emerges. Table below compares the discipline wise performance of the Indian contingent at the recent Commonwealth Games held in Glasgow and the one held in Delhi 4 years ago.

A few key observations from the table
The Commonwealth Games in Delhi may have been marred by lots of corruption allegations, but they did raise the profile of the other sportspersons (i.e. all non-cricket) in India. Also factor in IOA being suspended for quite some time. So in all not too bad a result for Indian sports overall.

However a better indicator of the progress will come via the Asian Games in Incheon later this year.

Posted by Nishant at 7:03 PM No comments:

Friendship Day
Its nothing more than a marketing gimmick. An innovative way to make money by selling cards & bands & small items of little or no use. Some would say just crass commercialization of basic human feelings.

But its a concept which has arrived and with the increased reach of social media is here to stay. So we mark it by sending/receiving wishful messages from "friends". Every such message brings back its own share of memories of the particular friend. Memories of the times gone by.

So in all, not a complete waste.

So here I go, marking the occasion with a little compilation of songs dedicated to all friends that I have ever had.

1. Ye Dosti Hum Nahi Todenge (Sholay) - The first song that comes to anyone's mind when in company of friends.

2. Yaari hai Iman Mera (Zanjeer) - If friendship is your religion then most of world's problems wouldn't have existed


3. Mustafa Mustafa (Duniya Dilwalon Ki ) - Was quite in vogue when leaving school


5. Har Ek Friend Zaroori Hota hai (Airtel Ad) - Friends come in all sorts of packages. And every single one is essential.


Wishing a very happy Friendship Day to all those whom I have had the privilege of being a friend of at different points of my life. Cousins, Neighbours, Classmates across schools & colleges, Office colleagues & all others -  a post for all of you.
Posted by Nishant at 5:50 PM 1 comment: