Finally managing to take out that most precious commodity - time. And posting the sequel to Postcards from Pattaya.

I had been booking with Meru Cabs for my intra-city travels specially where being in time was of primary importance. And their reliability had been the major factor in being a loyal customer for years now. In fact, even though the number of such services have multiplied, Meru has been the service of choice for me. Only when they haven't been able to confirm a booking request would I look for alternatives.

However, one incident in the past week has changed the entire perception.

Had to take a flight in the morning. Keeping in mind the rush hour traffic and potential weather related exigencies, the cab was booked a day in advance. And was happy in the knowledge that the booking request had been confirmed via both sms and e-mail.

On the morning of the flight, at the fixed time, got ready to go but no cab came and neither was there any message. A little worried about missing the flight, I called up Meru. After being on hold for a few minutes, the message is conveyed that no cabs are available. And a cab "might" be arranged if someone becomes available. On being asked why was the booking confirmed, was told the slots were available at the time of booking. But now no cab is available. Now whatever this was supposed to mean.

A furious me then took the luggage and walked over to the nearest taxi stand (some 0.5 km away) and managed to hail a black and yellow cab. A few minutes later got a call from one Meru driver but I just said no thanks. Given the half an hour delay in the drama, was lucky to reach the airport barely in time and managed to board my flight.

What really pissed me off, thought, was not the cab not turning up, but the fact that Meru Cabs made no effort in communicating the issue. And there was absolutely no apology from their side. Taking a customer for granted. The chief reason for taking a Meru had been reliability but they had failed completely in this regard. Hence have decided that will not be using the Meru services in the future. After all there are multiple operators in this business now.

Now I also needed to vent out my anger. So during my taxi ride to the airport, tweeted about it. Got a couple of responses that a Meru not turning up inspite of a "confirmed" booking is not an uncommon issue (though it happened to me for the first time). After some time got a reply from Meru Cares handle asking to for issue details. However, I had already resolved the issue and had also resolved never again to use Meru's services. And getting a standardized automated response from a bot doesn't actually help in any issue resolution.

So Good-bye Meru Cabs, you won't be taking me for a ride ever again.
Posted by Nishant at 6:27 PM 5 comments:

The Beautiful Game. Joga Bonito. Copa Mundial. Brazuca. Ole Ole Ole vs La La La. Fuleco - will be some of the terms in everyday parlance over the next month filled with sleepless nights.

There is a certain charm associated with the FIFA World Cup which probably no other sporting event bar the Olympics has. And it has a special attraction to the Indian sports fan too. India has never played in World Cup Finals and doesn't come close to qualifying for even the later stages of the Asian Qualifiers. Anyway, we as a nation are better at watching sports than playing any (with the exception of cricket).

So every 4 years, without being burdened by any sense of false patriotism, we adopt a team as our own. Most of us become Brazilians or Argentines, a few are Germans, and lesser numbers become Spaniards and Portugese. There maybe a few Dutch and English too lurking amongst us. But till date haven't come across any supporter of our fellow Asian or African teams.Though once the group stage is over any underdog still remaining standing gets our whole-hearted support (excepting when the underdog is playing against us i.e. Argentina/Brazil/Germany/Spain).

As for me, always been a die-hard Argentina supporter (or at least since 1990 when I became aware of the existence of an event called World Cup football). Argentina were the defending champions and were lead by the legendary figure of Diego Maradona - a genius and yet the most flawed one ever. Enough reason to declare cent percent support to the men in White and Sky Blue. That year's bumpy journey ended via a penalty against the West Germans in the final. Since then its been a heart-breaking journey for any Argentina fan, not even making semis in five attempts. But my support loyalty to them has remained unwavered.

Inspite of the heartbreaks, and there have been many, there has been a certain thrill from supporting Argentina every time. The likes of Batistuta, Cannigia, Crepso, Sorin et al have always threatened to light up the tournament and take home the trophy yet somehow have never delivered. They have always given samples like this 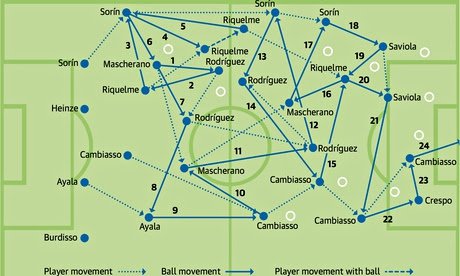 Argentina are certainly amongst the strongest contenders for the championships just behind the hosts Brazil. And Lionel Messi would certainly want to etch his name amongst the footballing Gods with a victory. The squad has the deadliest attack force (as always) in Messi, Higuain & Aguero though weaker in defence (again as always). They certainly have the strength to carry them from a relatively easy group into the knock-outs from whereon it becomes a matter of performing on the 4 key days. Which this squad is certainly capable of.

Well, as always hoping for the success of the La Albiceleste. Although if they do lose there is always this song to take solace in (or cry along to) for all the fans.


Although given that after God even the Pope is now an Argentine, there is no reason for Argentina not to win.

Posted by Nishant at 5:27 PM No comments: