Been a long time since my last post. I guess the excuse would be I was busy with many things at the same time. Well, Diwali was nearly 10 days back, but got a chance to write about it only now. This is the second post of A Day in my Life series. 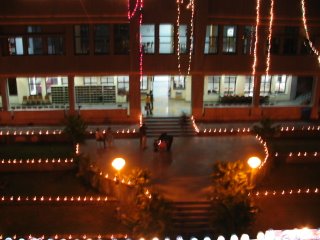 The date October 21, 2006, Diwali. The first Diwali on campus. The day started like every Saturday at Planet I. Three classes in morning...many people were grumbling about this what a way to celebrate diwali. But my thoughts went back to Diwali 2005. On that day I had to gone to Digboi for some field work (nitrogen unloading job to be precise), which was 50 km from my base Duliajan. Although not exactly ideal but relatively speaking it was still a far better situation.
After classes went to the city with a big group of friends. Going to the city seems like a big escape from the daily routine over here. Big movies like Don had been released over the weekend but no one was in mood for that. So all of us went to fun and games section (me thinks that the name is something else....but who cares). So then it was 2 hours of bowling, pool, video games, races and finally striking cars. Never thought that this could be so much fun.
Late in the evening, back to the campus for the Diwali celebrations. Had a gala time there too. So overall quite an enjoyable day.
Posted by Nishant at 11:58 AM 1 comment: