Last day of the year MMXIII A.D. Time to bid goodbye to year gone by while ushering in the new. Also time to take stock and to move forward.

The year gone by began with lots of experiences to be soaked in. A play, a fashion show, a small boat trip, another in-stadium match, some travel. All in the first half of the year. Then came health issues, all minor but more of the irritating kind (guess the side-effects of being on the wrong side of 30). And most of the second half of the year was spent trying to find some time to relax. Work is interfering too much into actual life.

Given all that happened in the year gone by, here is my list of new year resolutions.
Wishing all readers a very happy, prosperous and healthy (this is what happens when you are on the wrong side of 30) new year 2014
Posted by Nishant at 2:39 PM No comments:

Email ThisBlogThis!Share to TwitterShare to FacebookShare to Pinterest
Labels: Me 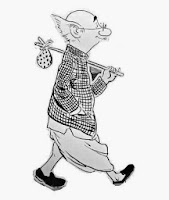 2. Rise of the Common Man
The Aam Aadmi Party performed beyond everyone's expectations (personally I expected them to win 0 seats in Delhi assembly elections). The people came out in large numbers to vote and voted for the person who claims to provide an alternative. The cynic in me now wants to believe that change is possible and can be brought upon by people power. But the cynic still wants me to wait and watch more.

3. Picture of the Year - The Lightning Bolt
Madiba's funeral drew the whole world. In such a solemn occasion there was the selfie moment shared by the 3 different world leaders (US President Obama, British PM Cameron and Danish PM Thorning-Schmidt). But the picture of the year comes from the World Athletics Championships in Moscow. Usain Bolt ran across the track while a lightning bolt struck in the background. 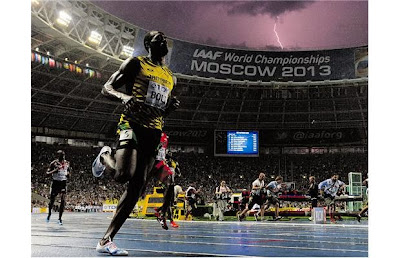 4. Management Post of the Year - "Enthusiast"
If we believe the BCCI president N Srinivasan, his son-in-law, Gurunath Meyiappan had access to his IPL franchisee's dressing rooms, dug-out, after-game parties, player auction (and what not) in his capacity as a "cricket enthusiast".  I guess time for all organisations to have more such "enthusiastic" people in their ranks.

5. Orwellian Moment of the Year - Edward Snowden Revelations
It almost seemed straight out of the George Orwell novel 1984 but the state is really watching you. Or at least they are actually tracking every bit of your online activities. not exactly a pleasant thought but still that hasn't put any brakes on internet growth. In all Snowden's revelations about NSA's spying ruffled feathers worldwide mostly politically but also forced him to live a life in an airport terminal (albeit temporarily). An American forced to live in a Russian airport building as no one (well except USA) was willing to take him in, almost like the story of The Terminal in reverse.

6. The "Kitna Deti Hai?" Moment of the Year - Mangalyaan

India launched its indigenous developed mission to Mars, the Mangalyaan. While "intellectuals"debated whether India being a poor country should indulge in such whimsical fancies of going to space before they sort out their internal issues, some bright soul figured out the cost of the Mangalyaan.Apparently it worked out to be Rs 15/km the same as autos in Mumbai. Perfect figures for a country obsessed with mileage as one advertisement would have us believe.

7. The Armageddon Moment of the Year
Russia getting showered by a meteor. Fortunately no one was killed. There were lots of videos post the event but unfortunately no Harry Stamper and team to respond to such events.

8. Dance Step  of the Year
"Twerking" entered the popular lexicon thanks to the antics of Miley Cyrus during a live performance. This being a webpage for family audiences, nothing more is going to be mentioned here.

9. New Born of the Year
The only birth mentioned (so far) for the year as per wikipedia. "His Royal Highness Prince George Alexander Louis of Cambridge" certainly has a big name (of his own) to live up to.

10. Saga of the Year
It could be seen on buses and trains. People engrossed in their smartphones and tablets as they aligned sweets and tried to clear one level after another in the nearly ending Saga of the Candy  Crush. The world was almost neatly divided into people playing Candy crush and those who were not playing this worldwide phenomenon. (Me stuck at Level 197, at the time of posting)

So this was 2013. Or rather just some random tid-bits to remember the year going by. Its not a comprehensive list nor is it meant to be. After all everyone will have their own memories of the year  gone by.