Basic Premise
A gang of people who imitate real "law enforcement agencies" to carry out loot missions. Apparently based on a real life incident of a noted jewellers being fooled by such a group in the late 80's

Movie Notes
The Positives - An outrageous idea but it works quite well. Believable acting, a very realistic 80's setting make the film work.  The story manages to hold the suspense till the very end. The climax has the feel of Oceans's series films.

The Negatives - The film could have been easily made more crisper by taking out the needless romantic angle. Also there is too much focus on the logistics bit. The players "power walking" from one place to another, people carrying the raid collection, signing papers, vehicles moving from one part to another. The whole logistics bit seems to have been a little over-done.

Overall Feel -  The film works. Neeraj Pandey has delivered another good film after "A Wednesday"

Random Thoughts
Why should Akshay Kumar do weird roles when he can do roles such as this?
And the Manoj Bajpayee laughter in the climax totally reminds me of the movie - The Prestige.
The 1980s seem to be a totally different era altogether.

Previously on MovieNotes - OMG! Oh My God
Posted by Nishant at 7:50 PM No comments: 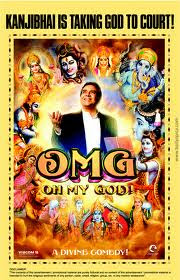 This was one movie that I had wanted to watch when it released but for some reason wasn't able to. Finally managed to catch it while channel surfing looking for something to watch. And of all channels it was on DD National where I found something worth watching (The Irony!)

Thoroughly enjoyed - both the acting as well as the message coming out of the story. The concept of God and religion as depicted in the film was what I could personally relate to and more in line with my beliefs. And good acting by Paresh Rawal and others made this fantasy plot quite believable.

The film is also a nice commentary on the business of religion.

Best Line - Paresh Rawal & Akshay Kumar had lots of great punch lines but the line of the movie (IMO) was delivered by Mithun Chakraborty's character - "People here are not God-loving, they are God-fearing"

Rating - 9/10. For being a clean entertainer with a message.

P.S. 2012 was quite a good year for Hindi cinema with lots of repeat-watch movies coming in the year - Vicky Donor, Barfi, English Vinglish, Kahaani, OMG, Gangs of Wasseypur etc. not to mention the likes of Dabangg 2 & Singham

P.P.S - Want to watch the play Kishen vs Kanhaiya on which the movie is based.

P.P.P.S - I hope no one's religious sentiments got hurt on reading this post.

Previously on MovieNotes - Dabangg 2
Posted by Nishant at 3:50 PM 2 comments: