Maradona – the Hand of God with a touch of the devil

Diego Armando Maradona - a once in a century player, he was a maverick, a genius, a maestro with the ball guiding a football with his left foot, drugs. Taking mediocre teams to glory not seen before or since (Argentina & Napoli). Worshipped as a deity by not just his countrymen but fans all over the world (there is even a Church of Maradona). And yet also embroiled in all sorts of controversies – drugs issues, tax problems, violent behavior, health issues, the company of not so good men!
And yet all through this time he remained someone who continued being loved and adored by fans across the world. Probably because he was more open about his flaws than many famous ones.
The bare stats first – he has trophies at the biggest stages - World Cup, Youth World Cup, World Cup Golden Ball, La Liga, Copa del Rey, Serie A (twice), UEFA Cup, Argentine Primera Division and many others. However, even this list glittering doesn’t some close to describe what a phenomenon he was. After all, not many players transcended the game the way he did and managed to enhance the beauty of the beautiful game!
That game against England (World Cup 86) put on display the contradictions of this maverick. On one side there was the stealth of the “Hand of God” punching in the ball over the keeper and just four minutes later, single-footedly leaving the entire England defense stupefied. The ball dancing along with his foot is one of the most mesmerizing pieces of wizardry seen on a football field. Did he have a wand with him? Not for nothing is it the Goal of the Century! Have read so much of this event in the past few days that I don’t even have to see the footage anymore of this goal!
Just how big an influence was he on a tiny me? For all my pretense to be a big sports fan, the only sports shirt I own is a replica “La Albiceleste” shirt! Italia 90 was the event which introduced the biggest single sport tournament to me. And he was the God there, even though his powers had started waning. Somehow dragged Argentina into the final where they lost to West Germany and haven’t won since. But that hasn’t stopped me supporting Argentina ever! Now this is the impact on someone who did not see him play at his peak. No wonder why the whole world paused to grieve his passing away.
Finally, no Maradona tribute can be complete without a video displaying his almost non-human skills. So here is my favorite bit – not of him in action but just warming up! And hope that Asif Kapadia documentary comes soon!

Farewell Diego Armando Maradona! You have gone to a better place.
P.S. The best article I read on Maradona - From The Guardian
Posted by Nishant at 5:02 PM No comments:

BookMarks #75: The Tales Next Door 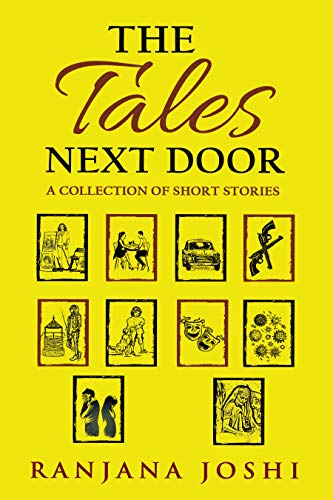 Title: The Tales Next Door: A Collection of Short Stories
Author: Ranjana Joshi
Genre: Fiction, Anthology
Published: 2020
BookMarks
A collection of ten short stories covering a variety of themes. Most cover the common, everyday life. Quite a few of these have a twist in the tail. Even when you can see the twist coming, it still provides an engaging read. And I liked the fact that most of the stories do not have a finality but leave on a note pregnant with possibility of developing into a bigger story by itself.
My favorite of the ten stories is the last one “The Station Artist” which depicts the full circle of life!
Overall, quite an engaging read.
Previously on BookMarks: Journey Down the Years
Posted by Nishant at 7:25 PM No comments:

BookMarks #74: Journey Down the Years

Title: Journey Down the Years
Author: Ruskin Bond
Genre: Non-fiction, Memoirs
Published: 2017
Summary
A collection of 25 “tales” by the maestro Mr. Bond (as I like to read his name)
BookMarks
It is always a pleasure going back to the writings of Ruskin Bond. The stories are simplistic and yet fill with an unadulterated joy. While the book’s title suggests that it is Mr. Bond’s autobiography and thats how the initial stories start off but then the book takes its own course into nature. A constant theme of the stories is the lament of nature losing its battle against human development but everywhere hope springs up. This is a tale of the adventurous wind which the writer first encountered in his childhood and which has taken him places.
Mr. Bond (I like saying the name) says that it is easier to write without being constrained by a subject. And that is how the book flows flitting from one subject to another - a collection of tales traversed by that adventurous wind. Some on his own life, some his observations. Sometimes the writer is the hero of his tale and sometimes he is just a commentator providing us the "aankhon dekha haal".
Its the same adventurous wind which brings in that restlessness in the humans so that they are not satisfied with what they have. Rural folk want the hustle bustle of the city life and the urban folks crave  the tranquil of the hills. People come to see the Taj while a young fellow who has lived there ignores the monument and sees the people.
Yes, the Taj Mahal. As the author writes - it doesn’t change. Therein lies its beauty. For the effect on the traveller is the same today as it was three hundred years ago when the Frenchman, Bernier, wrote: ‘Nothing offends the eye….… No part can be found that is not skillfully wrought, or that has not its peculiar beauty.’ Oh, and I haven't seen it yet!
The book is filled with tales from the nature - the peacocks of Mathura, the crows who follow humans everywhere, the bat with a misguided radar, a spring making its way into a river. The garden lizard’s story has all the thrills of an Animal Planet documentary with a narration at par with Attenborough.
A couple of interesting lines about boredom and loneliness that I cherish - ‘Lonely! Why should I feel lonely? Is not our planet in the Milky Way?’ and 'Find a book to read & you will never be bored!' Both lines hold a profound meaning in these weird times. And the book has given me two tasks – Read Kipling’s Kim and re-read Jerome K Jerome’s “Three Men in a Boat”.
Finally, there was a passage quoted from Farmer's Glory by AG Street which is quite relevant in the covid-19 times

It is perhaps nothing to boast about, but there is little doubt that the present prosperity of British farming is mainly due to one man, who is now dead. His name was Adolf Hitler. There is no disputing that it was the fear of famine during the early 1940s which taught the British nation that despite all man’s cleverness and inventions, when real danger comes an island people must turn for succour to the only permanent asset they possess, the land of their own country. It has never, and will never, let them down; always provided they realize and obey this eternal truth—that to make the land serve man, man must first be content to serve the land.

A better analogy of self-sufficiency (or becoming aatm-nirbhar) can’t be provided.
Overall, a truly wonderful read!
Previously on BookMarks: My India
Other works of Ruskin Bond on BookMarks

#59 - The Perfect Murder – An anthology compiled by Mr. Bond.

#53 - A Gathering of Friends - A collection of short stories.

Posted by Nishant at 8:04 PM No comments:

It was the IPL 2020 season, thus presenting an apt time to introduce the gentleman’s game, albeit in its shortest official format to the kiddo.
But how do you explain the rules and nuances of this most complex game to a toddler. I mean how does one even start. But turns out it is not required. The game gets to you as you watch. So here is how the play goes as per the little one.
One "uncle" has the ball, does “run run run”. Another "uncle" has bat. The ball moves all over the place making everyone go “run run run”. Sometime ball is “catch”. And many a times somebody or the other goes "gir gaya".
Overall, resulting in a completely entertaining spectacle at par with "Baby Shark".
And it's not just uncles, aunty and didi also play on some evenings.
Meanwhile, the little one has also attempted to delay sleep time by asking Papa to watch some cricket! Not for nothing is T20 complete family entertainment!
Posted by Nishant at 8:25 PM No comments:

Title: My India
Author: Jim Corbett
Genre: Non-fiction, Memoirs
Published: 1952
Summary
The story of India and its people as seen by Jim Corbett.
BookMarks
Jim Corbett has been one of my favorite authors since my childhood days. His narration was always thrilling, to say the least. Don’t think any other writer has brought in words the thrill of a hunt as Mr. Corbett did.
However, My India is not one of his usual hunting tales. Yes, the guns, game, tracking in the jungle is there. But this book is more about the stories of the people he encounters in his twin roles as a railway contractor based at Mokameh Ghat (modern day Mokama in Bihar) and his “home base” in Kaldhungi (now in Uttarakhand). The people are poor, but very honest and if you do good to them, they will return and repay you in every way possible.
In his writings Corbett displays a better understanding of Indian traditions, caste system and village life than many of our own writers. Understanding and depiction of caste hierarchy, the money-lending system, social standing of different people – some of it can be compared to the writings of Munshi Premchand. The fact that he lived with the villagers and spoke the language of the people certainly helped.
Of course, reading the book almost a hundred years later does bring a different perspective. Corbett and his people live in a kind of cocoon. There is no resentment of any kind against the British rule and no mention of the freedom struggle which was underway in the time. Quite a surprising omission when one reads it now. And did Corbett never face any ill-treatment? But these do not take anything away from the simple yet gripping tale of My India.
The book ends with a story of “Snake” in the chapter “Life at Mokameh Ghat”. Incidentally this story was in my Std 6 Gulmohar graded Reader, which was my first experience of Corbett’s writing. So quite an interesting end!
Previously on BookMarks: Veerappan: Chasing the Brigand
Posted by Nishant at 8:36 PM No comments: