After a few days in Italy, these words automatically get added into the daily dictionary. 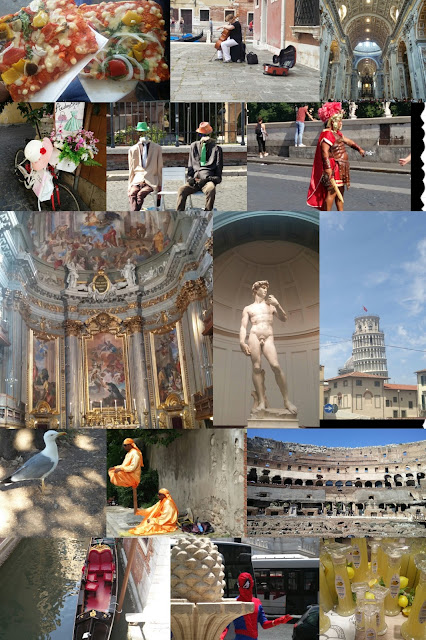 Italy - how do I describe it? The entire country seems to be a live history lesson - there are churches, museums, fountains, canals, archaeological sites – all linked with the land's glorious past. The saying "All those who wander are not lost" fits well with the place. You take a wrong turn and you end up discovering something unexpected. All of them quite fascinating, but none so much as the experiences.

Italians love football. After all they are four-time World Champions of the planet's most popular sport. UEFA Champions League Final happened to coincide with our stay. Watching the Final alongside a bunch of what I thought Juventus supporters at a restaurant was quite an experience. They cheered for everything - a goal scored, a goal conceded, a foul, a good save and sang throughout, while pizza and beer flowed freely. Juventus lost that day and chants of “Juve, Juve, Merda” still resonate. Turns out it was an anti-Juventus chant after all!

Just how big a phenomenon was Roman Holiday! Some sixty odd years after it's release, it is a cultural landmark (in a nation full of landmarks)! Audrey Hepburn, Gregory Peck and their Vespa are still visible all around. Also, found a little shop which called itself Audrey's Shop.

A lone cellist playing in the basilica square. The music, hauntingly beautiful and soothing. Just sit on the steps, close your eyes and be mesmerized. And you are recharged for the walk to the next spot in the itinerary. Only, you don’t feel like leaving the place at all.

The Roman Empire may have disappeared, but here and there were some “gladiators” challenging you for a duel. Rather asking you to get a photograph taken in exchange of money. But, still it was funny to see a man all dressed in gladiatorial costume taking a sip of water from a plastic bottle during a break.

Beware of sea-gulls. They may seem gentle but if you have food in hand they can be quite deadly. Some launch direct attacks. Others can do stealth attack as well. Witnessed one such sneaky attack where the bird was once thwarted off but it circled and sneaked up from behind to snatch a pizza slice right out of the hands of its hapless victim.

Which brings me to the food. After all, Italy is the home of pizza and gelato. Hours of walking, trying to soak up all the history around can leave you very hungry. So, you enter a pizzeria, ask for a margherita (pizza) and the shop-owner says – “But I am Alessandro”. Italians do have a charming sense of humour!

But one can’t have pizza for all meals. So imagine the happiness which the sight of a “genuine” Indian restaurant brings. (And not a Bangladeshi one masquerading as an Indian). The owner greets you warmly with “और कैसे हो ” while Humma Humma (the new one) plays in the background. Apart from the great food, they also had an updated Bollywood playlist.

We did stand out as Indians in a foreign country. Even the border police at airports greeted us with a Namaste! And that’s what made an elderly couple strike a conversation with us while taking a breather from the sightseeing. They were from Sweden, spoke English and had adopted a child from India. Over the next few minutes, apart from other things, learnt about their little town in Sweden whose entire population could easily fit into one of the average size building complexes in Mumbai! The conversation may have been initially hesitant (from our end) but certainly was an enriching one.

Back to the churches and the music now. After a long day of sightseeing, sitting in a piazza listening to some live music and I see a colleague from work. The world certainly is a small place.

And I found a church with a personal connect. In Rome, near to the Pantheon was the Chiesa San Ignacia de Loyola. A church dedicated to St. Ignatius of Loyola, the founder of the Society of Jesuits, which runs my alma mater.

And many more such memories to be cherished forever.