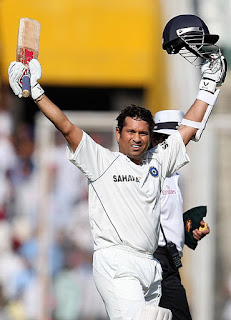 If I start writing on the above topic, I could just go on and on. During the first day of the ongoing Mohali test against Australia, the Little Master became the highest scorer in the history of the game. Though this is a big achievement, it had a sense of inevitability about it. He had just achieved something which he had seemed destined to since he made his debut against Pakistan way back in 1989 as a 16 year old. Although he has been the backbone of the the Indian batting for the last two decades, I havent counted Sachin Tendulkar as my favorite Indian batsman at any time. Mohammed Azharuddin and Rahul Dravid have been my favourites. However, Sachin has been and will remain the greatest batsman of all time. I actually started following cricket seriously from that particular Pakistan series onwards (I remember the results of all Indian test matches and most of the ODIs from that point onwards). Many players have come and gone. Sachin has been the only constant. I will not even try to list down his achievements which are many. Here is a random compilation of memories I have of Him and His performances.
There are many more memories of Sachin Tendulkar as he went past various records. Once he retires there may be others to take his place in the line-up. But can anyone else rule our hearts as he has done for the past 19 years (and hopefully will be doing for some more time to come).

P.S. I also have a personal memory. Having dinner at the restaurant Tendulkar's, while wearing chappals while other diners were in suits.
Posted by Nishant at 10:51 PM

Email ThisBlogThis!Share to TwitterShare to FacebookShare to Pinterest
Labels: cricket

Sachin Tendulkar became the highest run-scorer in the history of Test cricket during India’s match against Australia, eclipsing Brian Lara’s record. The batsman, accorded demi-god status in his country, collected the 15 runs he required with a push to third man off the bowling of Peter Siddle to send the home support into raptures. Fireworks were released as the game came to a brief standstill. Australia’s players, including captain Ricky Ponting, were among the first to congratulate Tendulkar, who also holds the record for runs scored in one-day internationals. The 35-year-old ‘Little Master’ reaches the milestone in his 152nd Test appearance; though Lara accumulated just 131 caps in setting the previous mark.
--------------------------------------------
Bobwilliams
social network advertising

Who is this drivenwide and what he/she wanna convey :O
anyways, it was pretty noustalgic one; and yeah how can we forget that dinner at tendulkar's :D