Twenty Ten is passing by and it is time for some annual list making exercise. Following is a list of 10 arbit and unrelated things which happened in the year 2010. A random compilation of memories would be the most apt description of this. Here goes in random order, 10 from 2010.
1. Legend of the Year - Rajnikant
﻿The number of SMSs, mails, blogs which have been inspired would itself have created a record. Chuck Norris, Jack Bauer have been totally overpowered. A classic line - Chuck Norris once met Rajnikant. He was reduced to being a joke on the internet.
2. Musical Instrument of the Year - Vuvuzela
Popularised in the football world cup, it drowned the commentary, made watching footbaal a pain in the ears. No one liked it, no one stopped it. It was just there. 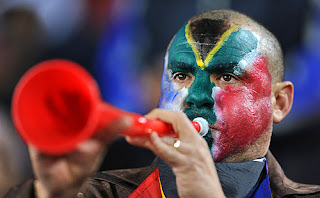 3. Place Name of the Year - Eyjafjallajokull

The Icelandic volcano which disrupted almost the entire European air traffic. Disasters dont have a more exotic name.
4. Management Jargon of the Year - Sweat Equity
The IPL-Kochi franchisee mess did give a new management jargon. Sweat equity. Pretty powerful term. Afterall it led to the resignation of a Union minister.
5. Brand Endorsement of the Year - Zandu Balm
Munni badnaam huyi aur phir zandu balm ho gayi for her darling. Result - Quarterly Sales of Zandu balm increased by 35% post the release of song.
6. Loser of the Year - Prashant
Someone's blind faith in a mental conversation with Lord Ganesha led to picking two wrong choices for the 5 crore jackpot question. And he ended up getting 3.2 lakhs after having won a crore in KBC.
7. Promise of the Year - Larissa Riquleme
In the space of a few days, Larissa became the most famous Riquelme on this planet (beating the Argentine footballer Juan Ramon). Her promise to the world certainly helped garner a lot of neutral support for Paraguayin the World Cup. Though wasn't to much avail as Paraguay lost in the quarter-finals. (She still kept her promise though)
8. Overexposed Gimmick of the Year - the MRF Blimp
It was there in almost every single IPL game. The camera would go up to the sky. The "marvel of tecnology" that was the MRF blimp would come into the picture. And the commentators would simply go crazy. In the next few breathless seconds they would mention everything from tyres to the pace academy to SRT's bat. Whatever goodwill MRF had generated in the hearts of the cricket followers through the Pace Academy had surely disappeared.

9. Anagram of the Year - Sir U Made Lakhs
Suresh Kalmadi. He and his team probably made crores. But the anagram could only come up with Lakhs.
10. The Leak of the Year - Wikileaks
The year ended with wikileaks. On a daily basis a couple of hundred secret cables from various US embassies are being released into the public domain. And a set of governments, officials, companies are getting red-faced. The best line - The last time there was a deluge of this proportion Noah had to build the Ark.

So this is 10 from 2010. A collection of arbit events for the year. Forget this year, Dont worry be happy. Blow your vuvuzela to usher in the new one.
Posted by Nishant at 2:24 PM